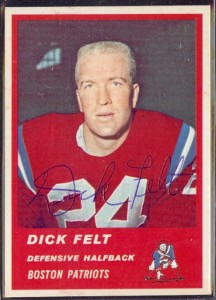 Former New York Titans and Boston Patriots defensive back, Dick Felt, has passed away.  He was 79 years old.  Felt was an original member of the Titans, and played two seasons in New York.  He joined the Patriots in 1962, and remained with the team through 1966.  Felt had 18 career interceptions, one of which he returned for a touchdown.