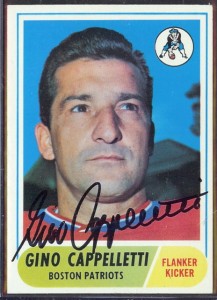 An original Patriot going back to the team’s first season in 1960, Gino Cappelletti made a name for himself as a reliable wideout and kicker in a career that lasted all 10 AFL seasons.  On offense, Cappelletti averaged just over four touchdown receptions per season during his time in the AFL.  As a kicker, he led the league in total points in 1961, 1963, 1964, 1965 and 1966.  He averaged 16 field goals per season, and had a career extra-point conversion percentage of 96.9%. 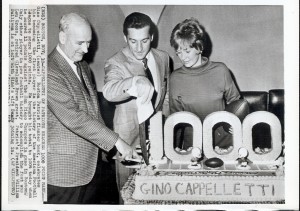 BOSTON, NOV 10 – CAPPELLETTI OF PATRIOTS REACHES 1000 POINT MARK – Gino Cappelletti, (center) Boston Patriots flanker back, celebrates his becoming the first players in the history of the American Football League to score 1000 points.  He brought his total to 1004 today when he scored 11 points against the San Diego Chargers in a game in Boston.  Only other player in pro football history to sccomplish the feat was Lou Groza, retired Cleveland Browns great.  Patriots President William Sullivan is at left with Gino’s wife Sandy joining in.

Gino Cappelletti retired from football after the 1970 season, but maintained his ties to the game by entering the broacast booth to serve as the radio analyst for Patriots games in 1972.  He held the position for seven seasons before taking a 10-year hiatus.  He was back on the air again in 1988, and has held the position since.  The radio tandem of Gino Cappelletti and Gil Santos has called Patriots games for the last 21 years.  Consistency on the field and in the booth – hallmarks of Gino Cappelletti.