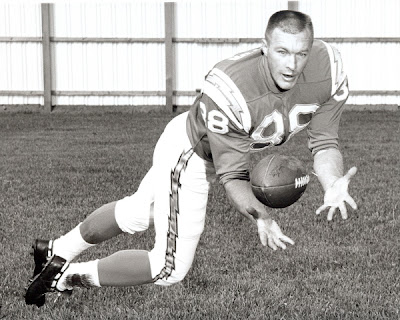 This week marks what would have been Don Norton’s 73rdbirthday.  Sadly, Norton passed away in 1997, of complications from open-heart surgery.

Don Norton was an original Charger, a member of the 1960 team that began in Los Angeles.  A two-time Rose Bowl champion and all-america end out of the University of Iowa, Norton was drafted in the first round of the 1960 AFL draft by the Oakland Raiders, but soon traded to the Chargers for defensive lineman, Charlie Powell.  Norton was a workhorse, missing only seven games in his seven-season career with the Chargers.  In 91 career games, Don Norton had 228 receptions for 3,486 yards (15.3 avg.) and scored 27 touchdowns.  He was an AFL All-Star in 1962 and 1963.  He played in five AFL championship games with the Chargers (1960, ’61, ’63, ’64 & ’65), and was an integral member of the 1963 AFL Champion Chargers team, despite playing the season with a back injury that he suffered while lifting weights in training camp that season.
The following is a collection of photographs and memorabilia from Don Norton’s time in the American Football League.
By Todd Tobias|2012-05-05T12:33:36-07:00March 16th, 2011|Don Norton, Los Angeles Chargers, San Diego Chargers|4 Comments