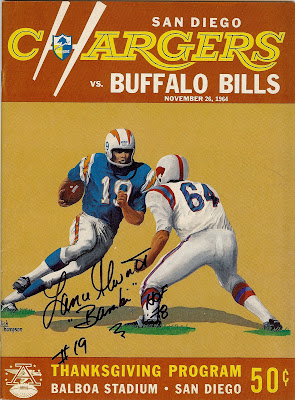 With Thanksgiving coming upon us tomorrow, this is a good opportunity to bring out one of my all-time favorite AFL game programs.  This program was issued for the Thanksgiving Day game between the Buffalo Bills and San Diego Chargers on November 26, 1964, at San Diego’s Balboa Stadium.
By this time Lance Alworth was a bonafide star, coming off an AFL MVP season the year before.  This was Alworth’s first appearance on a program cover, an honor that he would have eight times during his years in the AFL.  The cover is an artistic rendering of Bills linebacker, Harry Jacobs, attempting to tackle Alworth.  The artist was Dick Thompson, the man who is credited for creating the cartoon image of the San Diego mascot, Charlie Charger.

The game itself was a nail-biter, and the outcome was not determined until the very end.  With the game tied at 24 and three second left on the clock, Bills’ kicker, Pete Gogolak, launched a 33-yard field goal that pushed Buffalo ahead.  The Chargers were not able to make anything happen on the ensuing kickoff, and the Bills went home winners by a score of 27-24.
The two teams were to meet again in the AFL Championship Game at the end of the season. San Diego appeared to be cruising to an easy victory before Bills’ linebacker, Mike Stratton, unloaded an earth-shattering tackle on San Diego’s Keith Lincoln.  The Tackle Heard ‘Round the World changed the course of the game, and when the final gun sounded, the Buffalo Bills were crowned AFL Champs!
By Todd Tobias|2011-11-23T20:31:00-08:00November 23rd, 2011|AFL, American Football League, Buffalo Bills, Lance Alworth, Mike Stratton, San Diego Chargers|11 Comments