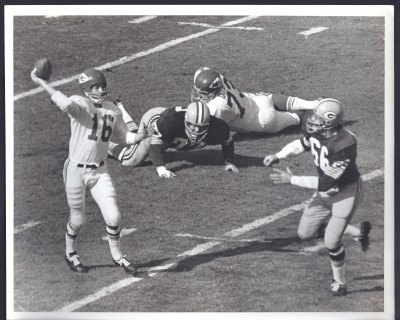 The 50th anniversary of Super Bowl I is sneaking up on us, and I can only imagine the media campaign that will be unleashed by the NFL.  Fortunately, this will also give cause for historians to review the first AFL-NFL championship game (as Super Bowl I was initially referred to) and all of the build-up surrounding the AFL-NFL merger.

A new book titled When It Was Just A Game by oral historian Harvey Frommer, is now on bookshelves across the country, and provides an in-depth look at that earliest of AFL-NFL contests.  I’ve just placed my Amazon order, and will be reviewing the book here on Tales.  In the meantime, I came across an interesting article about Frommer’s research for the book.  Some of these notes are rather well-known, but they still provide historical background on the spectacle that is the Super Bowl.

A Dozen Things I Learned Researching, Interviewing, Writing ‘When It Was Just a Game’