He was a Terror on the Field, but Ben Davidson was Cool.

Home/AFL, American Football League, Ben Davidson, Oakland Raiders/He was a Terror on the Field, but Ben Davidson was Cool.
Previous Next

He was a Terror on the Field, but Ben Davidson was Cool. 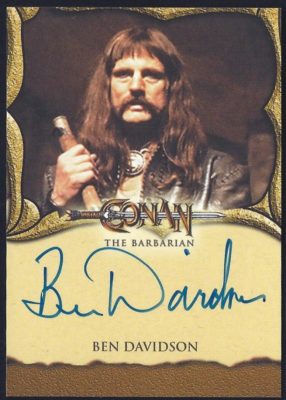 Ben Davidson can be a polarizing figure. Raiders fans love him. Most other fans hate him. He is well known for late hits and in fact, is the player who first began to cultivate the Raiders’ thuggish image. The funny thing is that off the field you would be hard-pressed to find a nicer guy than Davidson, as least when I knew him during the last 15 years of his life.

There are a lot of things that can be said about Ben Davidson, but one of them has to be that he lived life to the fullest. He was a football player, actor, motorcycle rider, world traveler and Miller Lite commercial star, in addition to being a devoted husband and father, and giver of countless hours of his time to charities around the country. I was recently hunting around eBay for cards to add to my collection when I found a card of Davidson in his role as Rexor, in the movie Conan the Barbarian. I bought the card and it arrived today. It got me thinking about Big Ben and the rich life that he lived.

I have written about Ben Davidson several times in years past. Here are some of the articles that give a bit of background about the old Raider:

Coffee with a Couple of Raiders

Ben Davidson lived about two miles from me and I would see him often around town, and visit him a few times each year. He was a great guy, and I miss him. Of course, I never had to play against him, so I can say that in all honesty… 😉