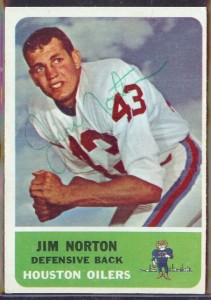 Jim Norton came late to the 1960 Houston Oilers, having first endured training camp with the NFL’s Detroit Lions.  The Lions released him with the second-to-last cut, but he was able to catch the attention of the Oilers who invited him to camp.  Described by his college coach as, “skinny as a rail, but a real football player,” Norton quickly earned himself a spot in the Oilers defensive backfield, and remained there through the 1968 season.  He doubled as the Oilers punter.

Norton hauled in only one interception in 1960, but his annual totals began to climb after that.  He had nine picks in 1961, which he returned for 150 combined yards.  Norton averaged 40.7 yards-per-punt in ’61, and earned his first of three trips to the AFL All-Star Game at the end of the season.

The former defensive back from the University of Idaho earned the Oilers ultimate team honor after the conclusion of his career, when Houston decided to retire Norton’s #43.  He is one of just six former Houston Oilers to have their uniform numbers retired by the club, the others being Earl Campbell, Elvin Bethea, Mike Munchak, Bruce Mathews and Warren Moon.