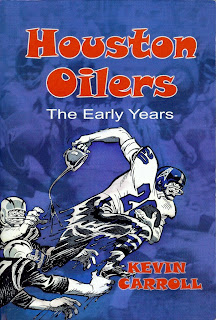 In the last 10 years, there have been a number of excellent books written about various subjects related to the American Football League.  From team histories to player biographies, game reviews to works focusing strictly on the AFL-NFL merger, authors have been working diligently on bringing forth the rich history of the old AFL.   Though it is not new to my personal library, I have recently pulled out one such book that I particularly enjoy; Houston Oilers: The Early Years by Kevin Carroll.
Houston Oilers: The Early Years, is a 277-page paperback issue that cover the Oilers franchise from inception in 1959 through their second AFL championship in 1961.  Interspersed throughout the story of the team’s formative years, author Kevin Carroll mixed in chapters dedicated solely to individual players, as well as to Coach Lou Rymkus and trainer Bobby Brown.
In my mind, this book’s strength is the colorful stories of players and situations that do a fantastic job of giving the “flavor” of the AFL. 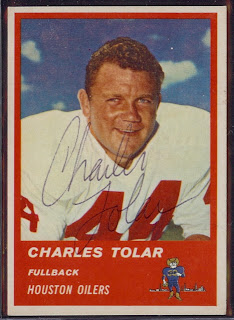 In describing bowling ball-shaped running back, Charlie Tolar, Carroll quotes an unidentified Oilers opponent as saying, “Tolar was so tough that when he ran you could hear clanking metal.  It was the sound of his testicles knocking together.”
Carrol uses an equally-humorous story to illustrate the long-standing feud between Coach Lou Rymkus and the Chargers Sid Gillman.  One Sunday morning, Rymkus and two of his players were coming out of a church service.
“Isn’t it a beautiful morning!” exclaimed Rymkus
“It sure is, Lou,” a player responded.
“And what a great day to play football!” Rymkus added.
“Couldn’t be better,” replied another. 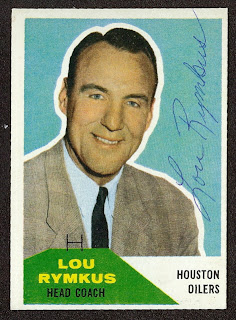 “I only wish that Gillman was here right now – I’d kill him!” chirped Rymkus.
But Houston Oilers is not simply a collection of comical quotes and stories.  Carroll did his due diligence as an historian, detailing the formation of the team, hiring of coaches, selection of players and ups-and-downs of the football seasons.
If I were to pick a single portion of the book that does not meet up to the high standards set in other areas, it would be the 16 pages of photographs that appear midway through the book.  While the image selection does a good job of illustrating popular players and topics covered in the text, the photos themselves are rather dark and not of outstanding quality.  This is understandable since acquiring images from professional teams can be difficult beyond belief, but nicer photographic representation would have made this fantastic book that much better.
So if you are looking for some interesting sports history, you can’t do much better that Houston Oilers: The Early Years.  It is not a stat-junkie’s dream book, but for someone that wants to learn about a team that was built from the ground up, this is a fantastic place to begin.
By Todd Tobias|2011-10-20T20:57:00-07:00October 20th, 2011|"Houston Oilers: The Early Years", AFL, American Football League, Charlie Tolar, Houston Oilers, Lou Rymkus, Sid Gillman|12 Comments