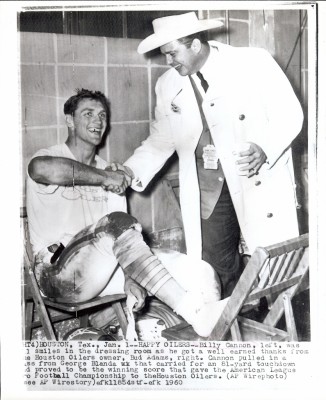 CAPTION READS – HOUSTON, TEX – January 1 – HAPPY OILERS – Billy Cannon, left, was all smiles in the dressing room as he got a well earned thanks from the Houston Oilers owner, Bud Adams, right. Cannon pulled in a pass from George Blanda that carried for an 81-yard touchdown and proved to be the winning score that gave the American League Pro Football Championship to the Houston Oilers.