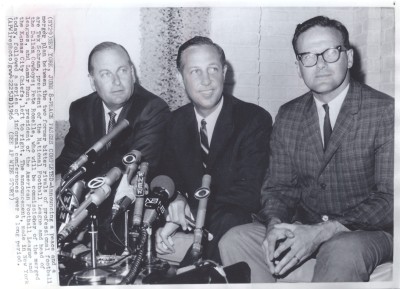 CAPTION READS – JUNE 8 – PEACE PASSES COMPLETED – Announcing a peace and a merger plan between the two former bitter rivals of professional football are Tex Schram, president of the National Football League and head of the Dallas Cowboys; Pete Rozelle, who will be commissioner of the merged leagues, and Lamar Hunt, president of the American Football League and the Kansas City Chiefs, left to right. The announcement, made in New York today, followed a series of informal conferences over a long period.