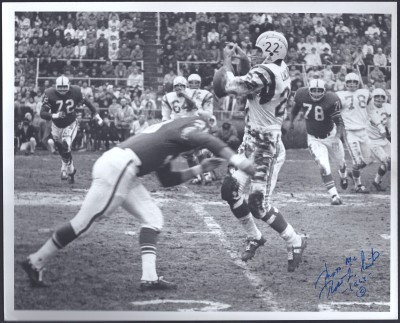 The Hit Heard ‘Round the World

This has been a fun decade, as seemingly everyday during the season we are coming up on a 50th anniversary of something to do with the AFL.  This year I have seen remembrances of the All-Star Game Boycott, Joe Namath signing his rookie contract, and others.  For Bills fans, December 26th marked not only the anniversary of Buffalo’s first AFL championship, but also of “The Hit Heard “Round the World.”

A great radio interview was posted recently to the Bills website.  Linebacker Mike Stratton talks about the Hit, the championship, and his great career in the AFL.