Jan Barrett of the Oakland Raiders

Jan Barrett of the Oakland Raiders 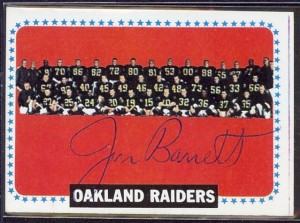 The AFL, like other professional football leagues, had a number of players who had very short careers, some lasting no more than a game or two.  Jan Barrett was just such a player, whose entire professional career spanned just two seasons.  However, Barrett had the opportunity to be involved in a couple of interesting teams during his 20-game career.

Drafted out of Fresno State by the Green Bay Packers in the sixth round of the 1963 NFL Draft, Jan Barrett joined a Packers team that was loaded with talent and led by legendary coach, Vince Lombardi.  Barrett, a tight end, saw time in just three game for the Packers before he was released.  He was soon picked up by the Raiders of the AFL, and completed the 1963 season for rookie head coach, Al Davis, in Oakland.  Ironically, Barrett’s 1963 statistics are identical for both teams.  Jan Barrett played in three games each for the Packers and Raiders.  He caught just one pass for each team, and both receptions were good for nine yards.

Barrett returned to Oakland for the 1964 season, and saw time in all 14 games.  He had 12 receptions on the season, good for 212 yards and two touchdowns.

Jan Barrett’s professional football career ended after the 1964 season.  I suspect that the end of his career was brought on by Al Davis moving Billy Cannon out of the backfield and into the tight end position.

Barrett was also involved in boat racing.  He was racing on Lake Ming, near Bakersfield, California, on October 7, 1973, when he flipped his boat while traveling at more than 150 miles per hour.  He was just 33 years old.