Jim Harris? He has been Found!

Home/AFL, Jim Harris, New York Jets/Jim Harris? He has been Found!
Previous Next

Jim Harris? He has been Found! 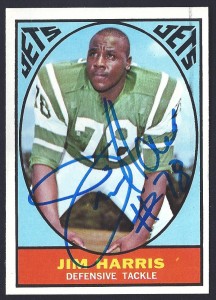 A little more than a month ago, I wrote a post titled, “Where is he now?  The New York Jets’ Jim Harris.”  I wrote a bit about Harris’s career with the Jets, and also how I had hoped to interview him for this blog.  As well, Jim Harris was the last living member of the 1967 Topps football card set that I hoped to sign a card for me, and I had not been able to locate him.

Fast forward to September 9th, when I received a comment on that blog post from a reader named, “J.P.”  J.P. said that he had actually met Harris a few months back.  He went on to say that Harris lived near his girlfriend and her son, that he was a really nice guy, and that J.P. would be happy to try to get my card signed for me.  Needless to say, I was thrilled for the opportunity.  J.P. and I began trading emails, and it was determined that he would ask Harris to sign five copies of his card.  One would be for his girlfriend’s son, and I would get the other four.  He also mentioned that Harris loved Omaha Steaks, and so I sent along a gift card as a “thank you” for his time and signatures. 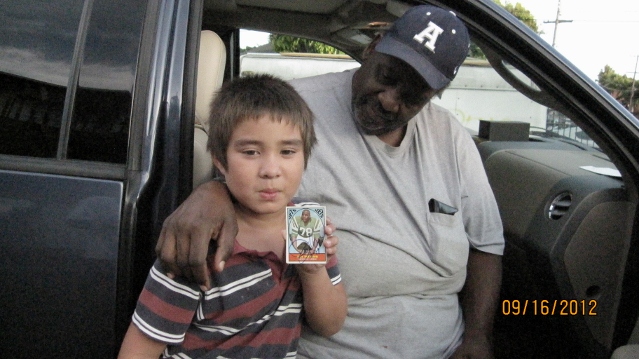 Four or five days went by, and I received an email back from J.P.  He had attached a wonderful photo of his girlfriend’s son, Nick, with Jim Harris.  The young boy was holding a signed Harris card, while sitting on Harris’s lap.  The note said that my cards had been signed, and were on their way back to me.  Two days later, my postman delivered the package, and with that, my autographed 1967 Topps set was complete.  This was the first autographed set that I had ever completed, and to do it in such an interesting manner was truly a treat!