One of my favorite subjects to post about is how fans use their own unique talents and creativity to make their personal connections to the AFL.  For some it is collecting memorabilia, for others it may be interviewing players, of watching highlight films.  I became fascinated with John Turney’s photo colorization when he first began emailing me photos last year.  As someone who has seen the league mostly in black and white, his colored images exploded across my screen, and gave me a completely new feeling and appreciation for the color and flavor of the AFL.  It sounds ridiculous, but when 95% of the images that you see are black and white, it can be very difficult to even envision the color back then.

Recently, John sat down and answered some questions about his colorization hobby, how he got involved in it, and where he hopes to take it.  Enjoy! 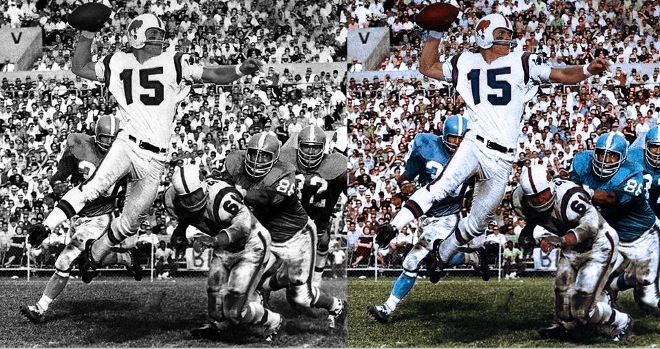 TFAFL – Tell us about your football background.  How did you get connected to  the game?  What era?  What is your favorite team?

JT – My football background is not very unusual. I played as a youth and through high school, but I was not talented enough to play college football, so my playing days ended then. I followed as a fan as a young man and since then. I began doing football research in the early 1990s trying to compile sack totals for players who played before sacks became official. In looking at old gamebooks I was able to piece together sacks for players like Deacon Jones and Alan Page, Claude Humphrey and others. That research was featured in Sports Illustrated and Pro Football Weekly.  http://nl.newsbank.com/nl-search/we/Archives?p_action=doc&p_docid=127C84D644186A88&p_docnum=16    http://sportsillustrated.cnn.com/vault/article/magazine/MAG1014057/index.htm  http://sportsillustrated.cnn.com/vault/article/magazine/MAG1020060/index.html   Currently, I am an assistant coach for a semi-pro football team here in New Mexico. Last year I coached the offensive line, this year I was the offensive coordinator. 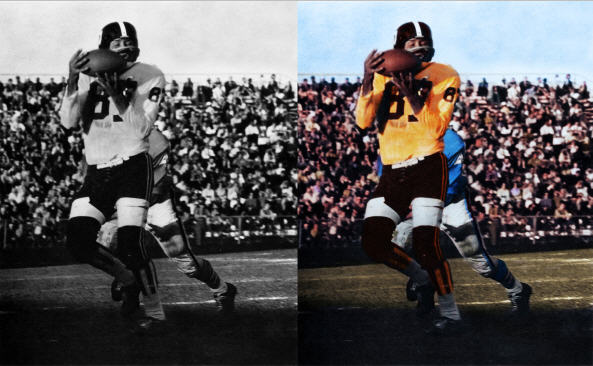 TFAFL – How and when did you first get the idea to attempt to colorize football photos?JT – I had always been interested in the process, and tried it many years ago when I first learned about Photoshop. But those attempts were crude and not very good so I didn’t bother with it for over a decade.  Tehn a couple of years ago I came across UniWatch.com, http://www.uni-watch.com/  a website that often features “colorizations” and I saw the good work the artists there were doing, so a couple of years ago I took another shot and I got better.  Once you learn the software, it’s not that hard, you just have to be patient and learn and practice.

TFAFL – Do you have an artistic background?  How did you go about learning the process?

JT – No, not really. As a child I did some artwork and took art in high school, but I don’t have any real training. When I did paint or draw it was usually sports figures or rock stars. I didn’t do much from high shcool until the last couple of years, so there was a big gap.  My learning process was trial end error in Photoshop, the software I use to do the colorizations. I learned what the difference settings on the tools in the software did, and just kept at it. 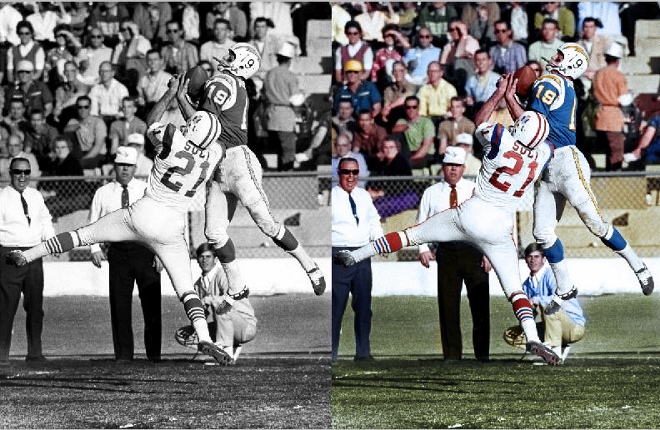 Lance Alworth and Bob Suci in the 1963 AL championship game

TFAFL – What are the challenges behind these pieces?  How long does it take you to complete the colorization of a particular photo?

JT – Well, the biggest challenge is getting a good scan to work with. The higher the resolution, the better the piece will be.  And also, when doing older pieces, say from the 1920s, it’s sometimes a challenge to make sure the colors of the uniforms are historically correct. I use the Gridiron Uniform Database website   http://www.gridironuniforms.com/     to check and crib off their research to make the colors as accurate as possible. I also use a Photoshop Add-in called Alien Skin Exposure which is a filter that will make photos take on the characteristics of different films. It simulates films from the 1930s or the 1950s. So that will add to the authenticity of a colorization. It can give a different look to the same photo, you can use a filter than simulates Kodochrome, or Poloroid, or even a Technicolor process that can really enhance the looks of a colorization.

TFAFL – What have been your favorite pieces to work on?

JT – I like to do the 1936 New York Giants photos, the uniforms are  colorful and unusual. I like the “leatherhead” era the most. Seeing those guys in color can be very striking. I also like doing the early AFL. The New York Titans uniforms, to me were interesting. The San Diego Chargers also look good, the photos were always so sundrenched that they pick up the colors well. I like doing the vertial striped brown and gold uniforms of the Broncos. 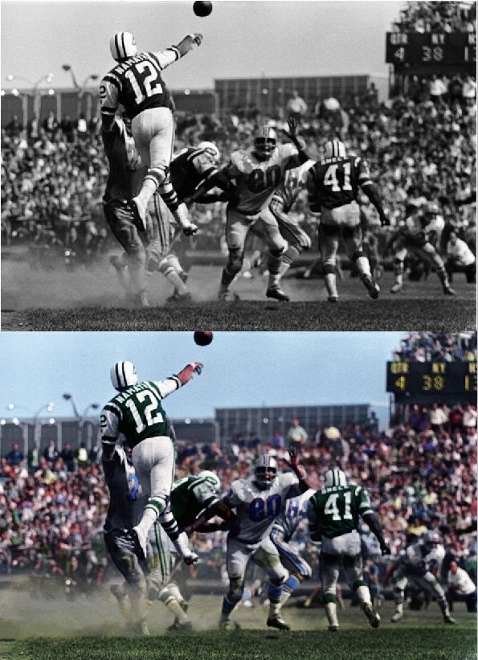 TFAFL – Have you been able to show your work to any of the players in these photos?  if so, what was their response?

JT – Some former players have seen my work, but most of them played recently, so they have seen color photos of themselves. But, I have colorized some of their high school or  college photos, and they like that, since it’s new. Sadly, the ones who might have loved to see them have already passed away. I wish this technology were around when guys like Red Grange or Bronco Nagurski were still around. Their decendants may have never seen anything in color of those players. 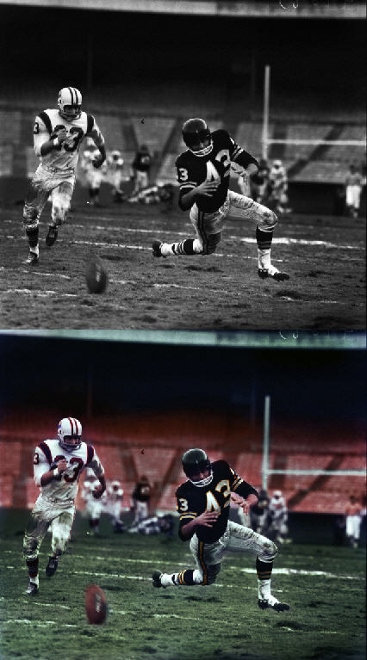 TFAFL – Do you have any goals in-mind, or large projects on the horizon regarding these images?

JT – I really don’t know what to do with it right now. I don’t know if people really like coffee table books anymore, but I’d like to do one, if there is any interest. I’d also like to have NFL.com. SI.com and the Hall of Fame look at my work so they might use it to add color to the photo essays they do. NFL.com regularly features old black and white photos, but I think some colorized photos mixed in would really increase their traffic and make younger fans appreciate the uniforms and the players of the past even more.