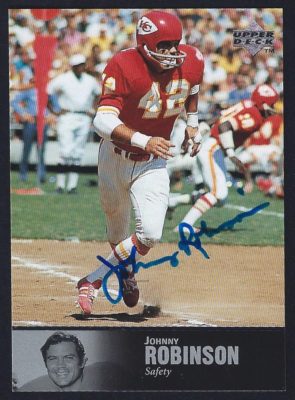 Johnny Robinson was drafted #3 overall by the Detroit Lions in the 1960 NFL draft, and was the Dallas Texans first round selection in the 1960 AFL draft. He signed with the Texans, and was a member of the Dallas Texans/Kansas City Chiefs from their inception in 1960 through the end of the 1971 season. He began his career as a flanker and halfback, and was moved to safety on the defensive side of the ball in 1962. He remained there for the remainder of his distinguished career.

Simply put, Johnny Robinson is one of the greatest safeties that I ever faced. In fact, I can’t think of any that I’ve seen in the 50 years since that have been better. When we ran cross patterns against Kansas City, I knew that I was going to get hit hard. I had to prepare myself specifically for him, both mentally and physically. Johnny Robinson absolutely deserves to be in the Pro Football Hall of Fame. – Lance Alworth, Pro Football Hall of Fame Class of 1978 – San Diego Chargers & Dallas Cowboys, 1962-1972

Johnny Robinson was the most athletic defensive back in the league. He could also play wide receiver and running back, and did at times. He should without a doubt be in the hall of fame. – Tony Banfield, Houston Oilers, 1960-1963, 1965

It was an honor for me to be a young coach on Coach Stram’s coaching staff on the road to SB IV. Johnny Robinson played a very important role in the SB IV win over the Minnesota Vikings.  His critical interception sealed a close and hard fought victory. Johnny played that game with banged up ribs and he played his heart out like did in every game. He was a team player and a coach’s player.  He is very deserving to be considered for the NFL Hall of Fame as he represents both the AFL and the NFL in his outstanding career. – John Beake, Kansas City Chiefs, New Orleans Saints Assistant Coach 1968-1977, Denver Broncos General Manager 1984-1998

I would play with Johnny Robinson any day, and put him up against anybody. I put him at the top as a safety. Playing with Johnny was like having a coach on the field. I was great to play with a guy who was such a student of the game. Johnny Robinson should have been put in the hall of fame a long time ago. – Bobby Bell, Pro Football Hall of Fame Class of 1983 – Kansas City Chiefs, 1963-1974

Johnny Robinson was drafted number three overall in the 1960 NFL draft, and was the Dallas Texans first selection in the AFL draft. He began his career on offense and was a very productive back and receiver. He was then moved to defense, and I cannot think of anyone else who made that change and played so well so quickly. He was very athletic, and his range and recognition made him an outstanding safety. In fact, I believe him to be one of the 100 best football players ever, regardless of position.  – Gil Brandt, Vice President of Player Personnel for the Cowboys, 1960-1989, Senior Analyst at NFL.com

Offense, defense, return teams…..Johnny Robinson could do it all and do it well.  Carried over his offensive skills catching and running with the ball to the defense, and became an all-time great safety, tough, fast and determined….what is a Hall of Fame without him? Eight years with Johnny….all good ones! – Chris Burford, Dallas Texans & Kansas City Chiefs, 1960-1967

Johnny Robinson was a fantastic safety, and really controlled the great Chiefs defense of the 1960s. In fact, the Kansas City Chiefs would not have been the Kansas City Chiefs without him. I have absolutely no reservations about saying that Johnny Robinson deserves induction into the Pro Football Hall of Fame. – Clem Daniels, AFL All-Time Team – Dallas Texans, Oakland Raiders & San Francisco 49ers, 1960-1968

Johnny was my roommate both during training camp and on all away games. He was an amazing athlete, a competitive tennis player, a halfback, flanker, and safety for the Texans/Chiefs. He was great in all positions. Johnny was the anchor of our great Chiefs defense, and a mentor to the younger defensive players. Johnny should have been inducted into the hall of fame years ago! – Len Dawson, Pro Football Hall of Fame Class of 1987, Pittsburgh Steelers, Cleveland Browns, Dallas Texans & Kansas City Chiefs, 1957-1975

I only watched Johnny on T.V. I remember how great he was, a for-sure HoF player. I am a huge fan, and was especially when I was a young kid. He was one of the best. – Joe DeLamielleure, Pro Football Hall of Fame Class of 2003 – Buffalo Bills & Cleveland Browns, 1973-1985

John always stood out when we played KC amongst probably the most talent-laden team in the AFL. He was a diagnostic player who could really hit. Reminded me of Nick Buoniconti. – Larry Eisenhauer, Boston Patriots, 1961-1969

Johnny Robinson was the best safety that I ever played against in my 16 seasons in the AFL and NFL. He was very smart, never out of position, and always made the play. He absolutely belongs in the Pro Football Hall of Fame. There is simply no question about it. – John Hadl, San Diego Chargers, Los Angeles Rams, Green Bay Packers & Houston Oilers, 1962-1977

Johnny Robinson is one of the greatest free safeties that played the game. He is an AFL pioneer and the greatest teammate anyone could have. It was a pleasure to play with him. – Wendell Hayes, Dallas Cowboys, Denver Broncos & Kansas City Chiefs, 1963-1974

He was one of the top DBs of all time. John was a student of all the great receivers of his era. He was a great cover guy, and he hit receivers with the strength of a linebacker. He adapted to whatever he needed to be. Smart, tough, a ton of character and a will to win. All of us that played with John considered him to be what a great football player was. I was proud to say I was a teammate of John’s. – Ed Lothamer, Kansas City Chiefs, 1964-1972

Every time he stepped on the field, Johnny Robinson came to play. He was very smart, very good, and is absolutely deserving of a spot in the hall of fame. – Paul Maguire, 10-Year AFL Player, Los Angeles/San Diego Chargers, Buffalo Bills, 1960-1970

Johnny Robinson is one of the best to ever play the game, and is long overdue for induction into the Pro Football Hall of Fame. He was a great and honorable player, and I never had to worry about taking a cheap shot from him. It was my honor to play against Johnny Robinson, and I would surely cast my vote for him.  – Don Maynard, Pro Football Hall of Fame Class of 1987 – New York Giants, Titans/Jets, St. Louis Cardinals, 1958-1973

The year of Super Bowl I (1966), I was an assistant with the Chiefs.  Johnny Robinson, had a unique mesh of talent.  He was a very intense performer; fully understood the defensive scheme and was able to make adjustments under pressure.  He was personable, friendly, helpful to teammates, and highly popular among the players, coaches and fans.  On a personal level, ’66 was my first in pro football, and it was intimidating.  Johnny sensed this and went out of his way to put me at ease.  Johnny has devoted his “after” football life to working on behalf of troubled youth. – Chuck Mills, Kansas Chiefs Assistant Coach 1966, Utah State, Wake Forest, Southern Oregon University Head Coach 1967-1988

Johnny Robinson was as hard a tackler as there was in the AFL, now the NFL. I played in front of Johnny and if I was blacked, Johnny hit like a linebacker – HARD! He could cover receivers like no one I ever saw, and they feared him and respected him. Johnny is long overdue in the Hall of Fame. He needs to be in it while he is still with us. – Paul Rochester, 10-Year AFL Player – Dallas Texans, Kansas City Chiefs, New York Jets, 1960-1969

Johnny Robinson was as complete a safety as ever played.  He was as valuable as Len Dawson, Willie Lanier, and Bobby Bell, all of whom are in the Hall of Fame. – Hank Stram, Pro Football Hall of Fame Class of 2003 – Dallas Texans, Kansas City Chiefs, New Orleans Saints Head Coach, 1960-1977

Johnny Robinson was fantastic. There’s no doubt about it. When you watched him against the receivers on your team, and saw the respect they afforded him, you quickly understood how great a player he was. – Bob Talamini, Houston Oilers, Oakland Raiders, New York Jets, 1960-1968

He was a remarkable player at his position. A dynamite tackler and superb defender versus the pass. He was the best at his position in the AFL! – Ron Wolf, Pro Football Hall of Fame Class of 2015 – Oakland/Los Angeles Raiders, Tampa Bay Buccaneers, Green Bay Packers, New York Jets Personnel Director & General Manager, 1963-2001

Without reservation I highly recommend Johnny Robinson for induction into the Hall of Fame. His character and football ability are top drawer. – Harvey Frommer, Author of “When It Was Just A Game; Remembering The First Super Bowl”

All you need to know about Johnny Robinson’s candidacy for the Pro Football Hall of Fame is this: He was called by all-time great receiver Lance Alworth the “best defensive back I ever played against” and he redefined the position of free safety, according to the late Jack Kemp, an astute student of the game who guided the Buffalo Bills to back-to-back American Football League championships in 1964-65. – Ed Gruver, Author of “The American Football League; A Year-by-Year History, 1960-1969”

Johnny Robinson was not just an outstanding safety who played all 10 years of the AFL. As the league’s talent got significantly better, he stepped up his performance. – Bob Lederer, Author of “Beyond Broadway Joe; The Super Bowl Team That Changed Football”

Johnny Robinson, as one of the great defensive backs in pro football history, deserves a spot in the Pro Football Hall of Fame. It’s not just because of his remarkable interception record, picking off 57 passes in 10 years as a safety, but also his uncanny intelligence as the air-traffic controller on the great Chiefs’ defense of the ’60s and early ’70s. Blessed with agility, grit, instincts and composure, he was one of the defining players of his era, justly earning his spot on the All-Time AFL team. All that’s left is his much-deserved bust next to his peers in Canton. – Michael MacCambridge, Author of “America’s Game” and “Lamar Hunt; A Life In Sports”

How the Hall of Fame voters could possibly have overlooked Johnny Robinson all these years is simply mind-boggling. A quick perusal of Johnny’s resume shows clearly that if he were playing in today’s game of fantasy leagues, flashy highlight shows and gaudy stats, he would be a Hall-of-Famer in his first year of eligibility. Consider that Johnny was a six-time All-Pro, played in seven All-Star or Pro-Bowl games, was a member of three AFL championship teams and one Super Bowl winning team, led the league in interceptions twice (both times in double figures), and is 13th on the all-time interceptors list more than 40 years after playing his last NFL game. Astounding! It’s time for the voters to give this man his due place in the hallowed halls of Canton! – Jeffrey J. Miller, Author of “Rocking The Rockpile: The Buffalo Bills of the American Football League” and “100 Things Bills Fans Should Know & Do Before They Die”

Safety Johnny Robinson was the ultimate defensive back in NFL history.  He was the quarterback of the secondary who led the NFL with 10 interceptions in 1966, and a reason why the Chiefs appeared in Super Bowl I. – Lou Sahadi, Author of “Len Dawson; Pressure Quarterback” and “They’re Playing My Game”