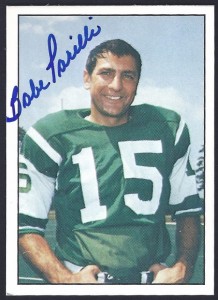 I’m not sure how many other people are collecting these cards either raw or autographed, but I thought it might be of interest to someone to illustrate the autographed subset.  The following 12 cards can be found in this set.  Non-autographed, or raw, these cards can be purchased very cheaply – not much more than a dollar or two apiece.  Signed examples are another story, though perhaps still not as expensive an one may think.

#6 – Joe Namath – The autographed Namath card will likely be the most expensive card in this collection.  Namath does not sign fan mail, and when he does autograph shows, his rates are usually around $180 to autograph a football card.  That said, if you can find one already signed, the chances are that it will be much cheaper, perhaps in the $45-$60 range.

#15 – Roger Ellis – Roger Ellis was a very willing signer before his passing in 2008.  That said, it could be challenging to find his signature on this rather obscure issue, as most collectors opted to get his 1960 Fleer card signed instead.

#36 – Dickie Post – The Chargers scatback can be a tricky signer TTM, but I have found him to be very cordial and willing.  A few dollars slipped into the request may increase your chances.

#43 – Lance Alworth – Bambi signs his mail regularly, though his fee can be high.  Like Namath, you might be better off to find a signed one on the secondary market.

#44 – Sammy Baugh – Though Baugh is one of the biggest names in football history, and he has now been deceased for a few years, his TCMA card is typically easy to find.  There are usually one or two on eBay, and they run in the $40-$50 range.

#49 – Don Maynard – The great Titans and Jets wideout often proves a challenge to TTM autograph collectors.  He is not very reliable through the mail.  He does, however, participate in autograph shows throughout the year.

#51 – John Elliott – John Elliott might just be the most difficult signed card to obtain in this collection.  Elliott was not a great TTM signer, and when he did sign, collectors usually requested his Topps cards.  The challenge was increased with his passing in 2009.

#54 – Art Powell – Art Powell has traditionally been a streaky signer through the mail.  There have been periods when he was nearly automatic, while other times he has not returned any of his fan mail.  If you have the card, it doesn’t hurt to drop it into the mail.  Otherwise, take a look for one on the secondary market.  I believe that I bought mine already signed for $6.

#57 – Bake Turner – Bake Turner just might be the easiest signed card of the collection.  Always great with fans, Turner is an excellent signer through the mail.

That’s it.  Only a dozen AFL cards in this set, so it should be small enough to keep the attention of even the most unfocused of collectors.  Still this set is not a slam dunk, so it will prove a challenge for even the most advanced collectors.  My completely-signed AFL subset can be found HERE.