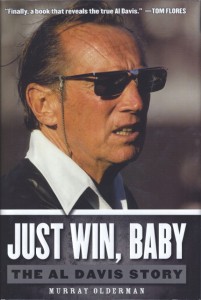 This time of year the shelves at local book stores bulge with new tomes pertaining to every theme in football – college, professional, biography, autobiography, strategy, important team/game, and on and on…  Fortunately there are several interesting AFL-related books that have been recently released.  One of them is Just Win, Baby; The Al Davis Story, by legendary sportswriter and cartoonist, Murray Olderman.  I purchased this book last week, and had the opportunity to read it over the weekend.  At just 202 pages, it is a fairly quick read.

Murray Olderman begins the book with the story of how this biography came to be.  Al Davis was interested in having his personal story written.  He figured that fans across the country would want “to find out how we changed the course of pro football, and how the NFL is practicing revisionist history.”  Davis contracted Olderman to write his biography, and put “no restrictions on subject material.”  Scintillating stuff for sure, when you take into account Al Davis, and what he has meant to professional football since first joining the Los Angeles Chargers coaching staff in 1960.  This promised to be the best of the Davis biographies, which brings me to my first problem with this book…

Olderman states that there are two unauthorized biographies of Davis, Just Win, Baby by Glenn Dickey, and Slick by Mark Ribowsky.  There is, in fact, a third unauthorized Davis biography, Black Knight; Al Davis and his Raiders by Ira Simmons.  At first I thought that the Simmons book must have simply been overlooked, and I was willing to give Olderman the benefit of the doubt, as copies can be difficult to find.  My willingness to overlook the simple mistake was soon challenged, however, as I began to find more inaccuracies in the text.

After spending several paragraphs talking about former Chargers tackle Ron Mix, whom Davis first coached at USC, Olderman sums up Mix’s greatness by stating that, “Mix also was one of only two players elected to the Hall of Fame whose careers spanned the entire independent tenure of the AFL: 1960 to 1970.  The other was Lance Alworth.”  Now there are a couple of things wrong with that statement.  First, there were more than two Hall of Fame players whose careers spanned the entire AFL.  Mix is one, but George Blanda, Jim Otto and Don Maynard also hold that title.  You will notice that I failed to mention Lance Alworth.  That is because Alworth came to the Chargers in 1962, and did not play the entire 10 seasons of the AFL.

It is common knowledge that Al Davis was a member of the early Chargers coaching staffs, and as such, he was responsible for courting and signing many of the top collegiate players that became Chargers.  Perhaps his greatest signing was the legendary flanker, Lance Alworth.  Olderman discusses Alworth joining the Chargers on page 55. “Because the Los Angeles market in 1960 didn’t respond to two pro franchises, just as it hadn’t in the days of the old AAFC with the defunct Dons competing against the Rams, owner Barron Hilton moved his franchise to San Diego for the next season.  With Alworth joining San Diego’s receiving corps as an immediate sensation and acquiring the nickname “Bambi” for his deer-like leaps, the Chargers were even better as a team in their new home and scored 396 points, third only to the Oilers and Boston Patriots, while losing only two games out of 14.  But once again the Oilers beat them 10-3 in the AFL Championship Game.”  Good stuff, but for one problem.  Again, Alworth joined the Chargers in 1962, not 1961. Not only that, but he was injured early in his rookie season, and as a result played in only four of the Chargers 14 games that year.  He was hardly “an immediate sensation.”

The other problem that I had with this book was that I expected a fresh look at the AFL/NFL merger, and likewise information that would be new to football historians.  Frankly, this book tells essentially the same merger story that is available in many other accounts.  The lone bit of new information, perhaps, is that Davis was working in conjunction with Lamar Hunt on the merger.  Essentially the two were operating separate flanks, both driving towards a similar goal.  Other versions of the merger story suggest that Hunt had been meeting with Dallas Cowboys general manager, Tex Schramm, in secret, while Davis was leading an assault on the NFL by signing their top players to AFL contracts.  Confirmation of their working together is nice to have, but truthfully, I think that most people had presumed that to be the case all along.

I don’t want to leave readers with the impression that this book is useless, because it is not.  As stated before, Olderman had rare access to Al Davis, and presents his rise to power in a readable manner.  I found Olderman’s account of how Davis came to be managing general partner of the Raiders to be the most clear and concise version that I have found.  I am glad that I have added this book to my AFL library.  However, I simply expected more out of a project that had such rare access to one of the most important figures in the history of the game.  I wanted a fresh and in-depth look at Al Davis, and the decisions that he made to not only bring the Raiders out of the doldrums, but also to lead the two leagues to merge.  What I got instead was basically the same account that I have read before, with a few cute anecdotes.  It is unfortunate, because I believe that a book on Al Davis, along the lines of David Maraniss’s classic, When Pride Still Mattered, about Vince Lombardi, would be a truly phenomenal book, and an instant classic in the world of football literature.