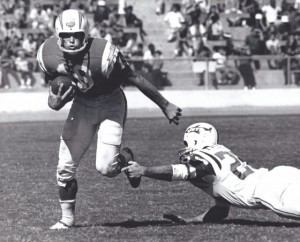 Lance Alworth heads down the field in a game against the New York Jets on October 13, 1963.

After spending a couple of days working in Lance Alworth’s football archive a few weeks back, I posted an article featuring Lance’s 1964 AFL All-Star Game jersey, which he still owns.  It is a beautiful jersey, and the photos that I took of the jersey gave many AFL fans their first look at a jersey from that game in full, living color. 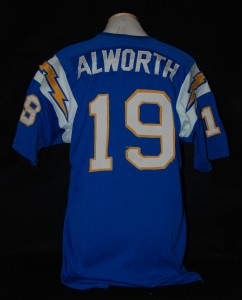 One of the other fantastic items in Lance’s archive is a beautiful example of his famed powder blue Chargers jerseys.  This particular Alworth jersey fits nicely into the 1963-65 range, when Alworth truly came onto the scene as a star in the American Football League.  Alworth shared the title of AFL Most Valuable Player in 1963, after helping to lead the Chargers to a 51-10 victory over the Boston Patriots in the ’63 AFL Championship Game.  While the Chargers lost the championship games to the Buffalo Bills in 1964 & 1965, Lance Alworth was no less a brilliant player.  He led the league in touchdown receptions with 13 in 1964, and then followed that up by topping the AFL in reception yards (1,602), average (23.2) and touchdown receptions (14) in 1965. 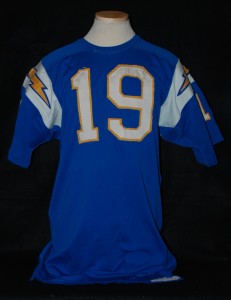 The jersey in Lance’s collection is in nice condition, and shows good game wear.  There is heavy wear on the shoulder bolts, and a bit of fraying along the edges of most patches (bolts, numbers, name plate). However it is not encumbered by numerous patches and repairs that you often see in other game worn jerseys.  It features proper tags from Spanjian and Higgins & Crosthwaite.  Perhaps most importantly, it stands out today as one item that is recognized by fans too young to have their own AFL memories.  Alworth’s Mitchell & Ness throwback jersey was, for years, one of the most popular of all throwback jerseys produced. 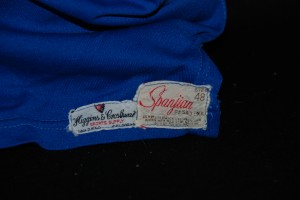