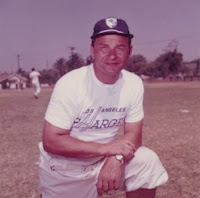 Welcome to my new blog, Tales from the American Football League. I first became interested in the AFL in 1998, as a graduated student at the University of San Diego. While working as an intern in the archives of the San Diego Chargers, I chose to write about Sid Gillman for my masters thesis. Over the course of the next year, I learned all that I could about Sir Sidney by spending countless hours in several archives, watching any and all AFL and Chargers-related video, spending time with Gillman himself, and interviewing the Chargers of the 1960s. What developed was not only a great appreciation of Sid Gillman, but also a deep interest in the entire AFL. I became fascinated with the idea that a group of relatively young and inexperienced (though typically very wealthy) individuals could not only put together a professional league in a rather short period of time, but also that this league could challenge and eventually gain parity with the well-entrenched National Football League.

There are countless interesting stories that developed out of the AFL over the years, and it is my goal to pass these tales onto the readers of this blog. We will explore the people, places and events that gave the AFL it’s flavor, and hopefully inspire an appreciation for this grand bit of history in the process.  So stop by often, and join me in celebrating the Tales From the American Football League!