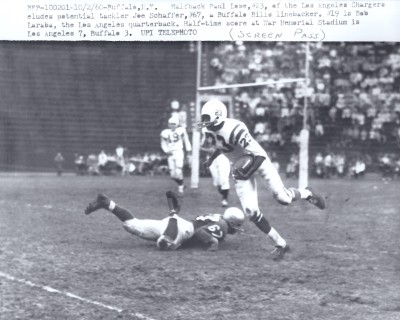 A couple of interesting notes about this photo…

Bob Laraba was a reserve quarterback and linebacker (odd combination), and did not have a completed pass in this game.  In fact, Bobby Clatterbuck, another Chargers reserve quarterback, played the remainder of the game and only had 70- passing yards.  The Chargers wont he game by a score of 24-10.

Laraba moved to San Diego with the Chargers, and played the 1961 season, but was killed in a car accident on February 16, 1962.

Bills linebacker, Joe Schaffer, played only one season for the Bills, 1960.  As tackles were not kept as an official statistic at the time, his career stat line reads 14 games, one interception for 19 yards.