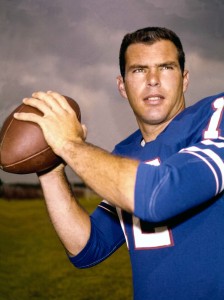 One of my greatest pleasures in my football dealings is connecting with fellow AFL fans and collectors.  I am always interested in hearing how fellow fans connect with the AFL.  Some like to collect memorabilia, while others prefer to research the league.  I have also met fans who collect AFL videos, make custom AFL McFarlane figurines, and still other recreate AFL teams and seasons in game simulations.

Mark Palczewski and I have been friends for more than a decade now.  We first met when Mark, a Buffalo native, was on a trip to San Diego, and he stopped into the San Diego Hall of Champions Sports Museum to view old Chargers photos.  I was in the midst of my research for Charging Through the AFL, and Mark and I became fast friends.

In addition to his love of the AFL, Mark has a passion for sports photography.  He has blended the AFL and photography into a unique and wonderful collection, which can be seen on his website, mark22.com.  I recently asked Mark if he would write a piece about this collection, and how it all began. 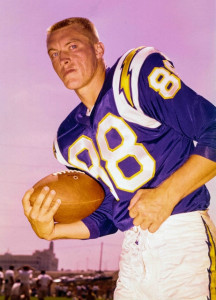 The negatives from the Topps Vault and my love for sports photography is a perfect marriage for me. I have been a pro football fan and collector since the 1960s and I’ve been shooting sports since I was 13 yrs. old.

Growing up in Buffalo, NY in the 60s and 70s naturally made me a Buffalo Bills fan. However my very first love was the San Diego Chargers of the AFL, and particular Keith Lincoln. As I’m sure many young kids were at the time, I was drawn to the flashy Chargers uniforms. Legend has it in my family that I heard my dad and brother talking about how they wish the Bills had Lincoln and he has been my favorite player to this day. I remember my brother even made lightning bolts and the #22 out of colored tape and affixed them to my childhood helmet.

Lo and behold, Lincoln was traded to the Bills in 1967. I believe I was starting kindergarten when the season started. I grew up only a few miles from the Bills training camp held at the old Camelot Motor Inn outside of Buffalo. Armed with my autograph book, I met Keith and got his autograph! I still have the autograph book and I believe it’s the very first piece of my collection. Later that season Keith was signing autographs at Sears at the Southgate Plaza. I got an 8×10 photo of Keith in a Chargers uniform and he addressed the photo to me. I would say that it is still my favorite piece in my collection. 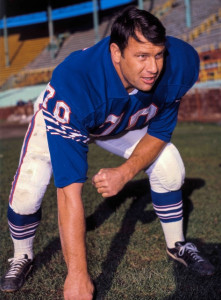 In the early 70s I began to get interested in sports photography. In 1975 I got my first 35mm camera. I still remember the first NFL game I shot from the stands, the 1975 Dolphins at the Bills and I still have the negatives today. I continued to upgrade my equipment and I shot a lot of Bills games and NASCAR racing throughout the 70s. In 1980 life got in the way and I joined the Navy. My last event as a true Buffalonian was attending the Bills – Dolphins home opener in 1980. This was 2 days before I left for the Navy. To this day, I regret not taking my camera! The Bills 0 for the decade streak against Miami ended and this game remains one of my fondest memories.

I continued to shoot sports (from the stands as a hobby) throughout my 6 year naval career and I got to shoot sporting events far from Buffalo. Currently, I have cut back to working part-time in my IT career in part to focus on my sports photography career freelancing for the local newspaper, several websites, a minor league baseball team, and an arena league football team among other clients. I hope to make it photographing the NFL some day from the sidelines with my own press pass!

A few years ago at a sports memorabilia show, a dealer was selling a poster sized photo of Billy Shaw that was used in his 1966 Topps football card. I became intrigued and he told me he also had purchased numerous negatives from the mid-60s Philadelphia Card Company. I thought to myself, I think I can do this! 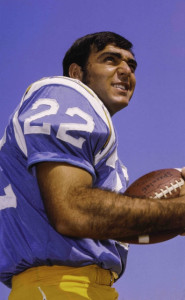 So I began my search on EBay. Many of the negatives in the Topps Vault never made it to the finished product. That is just fine with me; many players such as Bobby Smith and Willie Ross never had a Topps card. As luck would have it, I was able to obtain three negatives of Keith Lincoln! While I lost out on several more negatives, I was ecstatic that I now had colored negatives of my hero. It took some finagling but I was able to figure out how to open the negative holder that Topps used to encase the negative. I clean the negatives with a safe cloth and manual air blower and scan it in. I chose higher resolution so I could make a 16×20 poster from the slide.  After scanning, you can see numerous imperfections in the negative. I then used software to “clean up” the image and adjust the color to make the print more vibrant. This is a very tedious process. Once I had the finished product in my hand…a 16×20 color photo of Keith Lincoln, it was all worth it. I love photos and color photos of my heroes from the AFL in particular.  It is so rare to see color photos from the era, especially the AFL. While I’m sure the value of the item goes down the minute that I crack open the holder and remove the Topps Vault sticker, I’m not in it for the money. I want to see the negative made into a photo for all its glory.

Throughout the years I have purchased numerous negatives from the Topps Vault and I primarily focus on the Buffalo Bills and the San Diego Chargers.  Some negatives were out of my price range, such as any Jack Kemp negatives. I am still waiting for Topps to put up a negative of Keith Lincoln in a Bills uniform…I have been watching for years and I still have not seen one of those come up for auction. 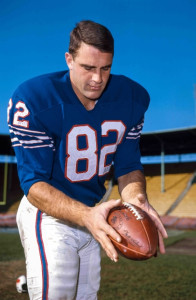 I love to get the prints autographed. All of the players who have autographed any of my photos always stop and study the photo. Many ask where it was from and they like to show how good they looked to their family. Whenever I am at an event where I obtain autographs for free, I always bring an extra copy and give it to the player.  I remember giving a photo to Ernie Warlick a few years ago and he and his wife were just overjoyed with it!  I was also lucky enough to meet Keith Lincoln at an event a few years ago. He signed my photos and I gave him a photo of him wearing #9 and he couldn’t believe I had that photo.

While my favorite photos are of Keith Lincoln, I do have some others that I really enjoy. Most are of players known only to historians. Such as Gary McDermott, the last player to wear #32 for the Bills before OJ switched to #32.  I have a photo of future Bills coach Kay Stephenson, as well as  James Harris in his rookie year with Buffalo.

I also purchase negatives or slides of Bills from other sources. Last year I purchased a handful of slides from the 1966 Chargers-Bills game in Buffalo. In this lot, I had a beautiful shot of Lamonica diving in for a TD. This is a great way for me to merge several of my  passions, sports photography, collecting, and pro football history. 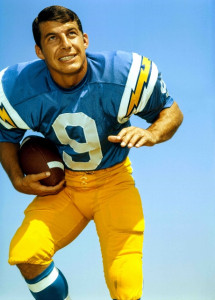 Because of my unfamiliarity of licensing, I do not sell my photos.  For that reason, I only use the prints for personal use. Sports photography allows me to document sports history visually and is the main reason I did not throw out my negatives when I was young. Even then, I felt a sense of sports history.

I am starting to put together a photo gallery of my restored Topps Vault photos so they can be enjoyed by fans and historians alike. They can be seen on my photography website mark22.com.