Guest blogger, John Freeman, traces some of his fondest childhood memories back to Balboa Stadium and the San Diego Chargers of the American Football League.  In this reminiscence, Freeman recalls the situation surrounding his appearance on the famed photo of Chargers receiver, Lance Alworth, leaping high to make a reception over Boston Patriots defensive back, Bob Suci.

That’s how I refer to the neatly framed, 8” x 10” black-and-white photo that hangs in my home office.

Take a look for yourself. 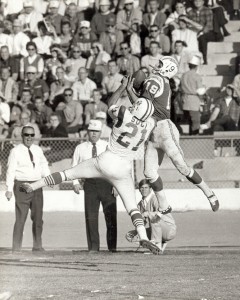 John Freeman (kneeling) had the best seat in the house to watch this Lance Alworth reception.

There’s the great and wondrous Lance Alworth, rising above the Boston Patriots’ defensive back Bob Suci (OK, I had to look up his first name) and there’s Bambi, grasping what was a sideline pass probably thrown by the Chargers’ aging, accurate quarterback, an NFL veteran and refugee from the Canadian Football League named Tobin Rote.

Since Bob Suci spent only one season with the Patriots, that being 1963, when the Chargers defeated the Patriots by the unfathomable score of 51-10 in the American Football League championship game at Balboa Stadium, that’s probably a photo from the title game.

I’d like to tell you that I remember that moment as if it were yesterday, except I don’t really remember that exact moment, just the feeling I get when I look at that photo of me and Bambi.

I don’t stare blindly at it for hours on end, or even minutes. Maybe I glance at it once in a while. But when Todd asked me to write a few words on that photo, I looked at it again.

Here’s what I see: The great Lance Alworth clutching that ball tightly to his chest with his dexterous, finger-tip control. And he’s soaring above the 5′-10″ Suci, who seems beaten by a step or two.

In double-checking the spelling of Suci’s name, I came across a troubling sign of the times: Suci is listed among more than 1,500 ex-pro football players who have filed suit against the NFL, claiming life-changing head trauma and multiple concussions from their pro football careers. Turns out that Suci, now 73, spent only two seasons in pro football for a total of only 20 games.

Looking more closely, I recall that the actual football clutched by Alworth is special, as well. Notably thinner and more aerodynamic as compared to the NFL’s fatter, lordly-named spheroid, “The Duke,” the AFL’s football was one among many reasons for the league’s wide-open style of pass-happy offense back in the 1960’s.

And for original AFL fans like myself, there was nothing better. That was a time when going to Balboa Stadium on Sunday afternoons was a joy I didn’t quite grasp as tightly as Bambi clutches that ball, but the memories remain vivid.

Heck, every time I happen to walk past a pepper grove, the pungent scent reminds of walking into Balboa Stadium, which, thanks to my father and his generosity in paying for $1.25 general admission tickets, I did for every Chargers home game going back to their original season here in 1961.

Vivid, too, is the image of that young fellow who’s kneeling on the sidelines, peering intently and quite clearly identifiable as me, as if it that particular moment should be rightly frozen in time.

I was 12. This was a few years before I was lucky enough to be selected as a ball boy for the Chargers, for three seasons later on while in high school. How I happened to be on the field for the ’63 AFL title game isn’t clear to me now, except that it must’ve been as a favor to my father, who was acquainted with Sid Gillman, otherwise dubbed “Sir Sidney” by the great Jerry Magee.

Looking at that photo reminds me of how I used to love going to those games, up-close and personal, seeing things and hearing certain earthy words I’d never heard before. My job as a ball boy in later seasons was basic: fetch errant passes and then toss a replacement football to the refs, and make sure you tossed it under-handed and accurately. And keep your mouth shut. 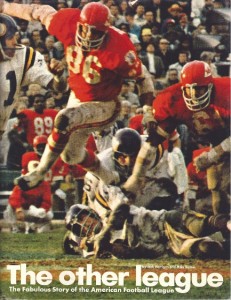 The first time I saw that photo, I was both pleased and surprised. Turns out, it was included in a circa 1970s pictorial book about the AFL titled The Other League. Back then, I loved everything about the American Football League. I remember how angry I was at Tex Maule, the pompous writer for Sports Illustrated who regarded the AFL with unveiled derision and scorn, as the little league that couldn’t. He didn’t know what he was talking about.

I collected pennants. I still have one somewhere of the New York Titans. It was yellow with blue lettering. I have one for the Boston Patriots, too. Wonder how much that’s worth. Probably not much because everything is available in retro-style these days, which is cool, but those of us who know, well, we know the difference.

That photo of me and Bambi brings back fond memories. I like that I was asked to remember that moment in time.