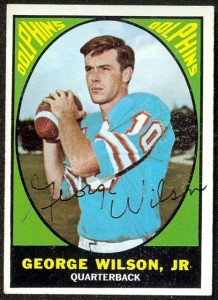 When discussing the latter years of the AFL, we have a tendency to focus on the Chiefs, Raiders, and Jets.  maybe a touch on the Chargers.  Rightfully so, especially as those first three teams represented the AFL in the first four Super Bowl games.  But there were another six teams in the league, two of which had their inaugural seasons in the late 1960s – the Miami Dolphins and Cincinnati Bengals.

I was forwarded this neat and concise article by Kevin Nogle, on the formation and early seasons of the Miami Dolphins.  It is good history on a team that had a quick and lasting impact on professional football.  I don’t always realize it because their overall record wasn’t great, but the early Dolphins had some fantastic players on their roster, albeit most in the twilight of their careers.