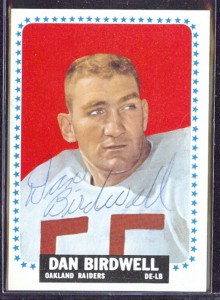 In my years of studying the AFL, I have learned that if I am speaking with a former Oakland Raider, that it behooves me to mention Dan Birdwell.  Birdwell, a Raiders defensive lineman, was a classic AFL character, and a legend among former players.  Dan Birdwell stories still run rampant through the AFL brotherhood, more than 30 years after his early death.  This Birdwell classic, as told by former Raiders and Bengals receiver, Rod Sherman, is the first is what will be the occasional, but entertaining theme of “My Favorite Dan Birdwell Story.”

It was my rookie year.  Dan Birdwell and Tim Rossovich…  Obviously they had nerve endings running throughout their bodies, but I don’t think they ever felt pain.  It didn’t matter what happened to Birdwell, and it didn’t matter what happened to Rossovich.  Those guys just didn’t feel pain.  My story about Dan isn’t really related to physical pain, but perhaps mental pain.

When you are a rookie, you are sort of taking it all in for the first time.  We were on a team charter to go play the Houston Oilers in Rice Stadium, down in Houston.  I think it was very early in the season, probably one of the first league games.  We landed in Houston, and I was looking out the window of the plane.  I saw all of these police lights showing up.  I thought this was fairly impressive because at USC, if we were at Notre Dame or playing at the University of Washington, we would have police escorts for our busses to get to the stadium, so I was thinking that here we didn’t even have to go into the airport terminal.  We were right out there on the tarmac, and we had a police escort forming already.

Well, Birdwell was sitting in the back of the plane, and everybody stands up and wants to get off the plane.  But here comes Birdwell, literally pushing his way to the front of the plane.  There was not anyone on the team that he could not move.  Some of the guys were like, “Dan, just cool it.  We all have to wait in line, and we all have to get off the plane.  With this police escort, our busses are not going to leave until everyone is on board.  Just be cool.”  But nobody actually said that to Birdwell, because Birdwell was Birdwell.  When Birdwell looked out the windows, he knew that he was several years behind in alimony, and was now showing up in his home state for the first time in many years.  He knew that the police were not showing up just to escort us to the hotel.  They were there to escort him to jail.  So Birdwell pushes all the way from the coach section through first class, and then we don’t see him.  He’s not at the hotel that night for bed check.  All we know is that Al Davis pulled whatever strings needed to be pulled to get Dan out of jail.  I think Dan made it to the pregame meal before we got on the busses to go to the game.  When you ask about Dan Birdwell stories, that’s the one that comes to mind.  He was quite a character.