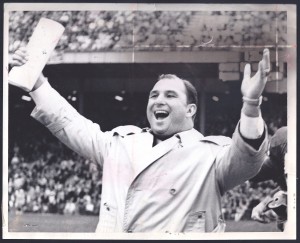 I just found my new favorite Hank Stram image.  The description from the eBay auction stated that the photo was from August 4, 1976.  It is stamped as such on the back, but only because this image was used to illustrate an article from that day.  Another stamp on the reverse says, “January 11, 1967,” four days before Super Bowl I.  I would guess that this photo was actually taken during the 1966 AFL Championship Game, in which the Chiefs defeated the Buffalo Bills by a score of 31-7.  Regardless, I think this is my new favorite image of this Hall of Fame coach.