I was fortunate to recently purchase a large collection of sports memorabilia.  Most of it will be sorted, organized and resold to other collectors.  There is a small group of items that have caught my eye, however, and I will be adding them to my AFL collections.  Here are a handful of my favorites. 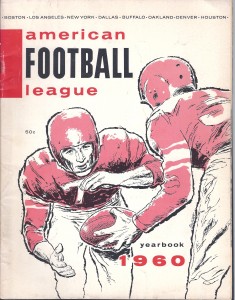 This 1960 American Football League yearbook is not particularly rare.  Produced in the AFL’s infancy, the book contains photos and biographical sketches of most of the men who played in the AFL’s first season.  It is interesting to ponder how difficult gathering player photos must have been for media outlets covering the AFL in 1960.  Many of the photos featured in the book are identical images to those used on 1960 Fleer football cards, which in-turn were mostly publicity shots from college and other professional teams. 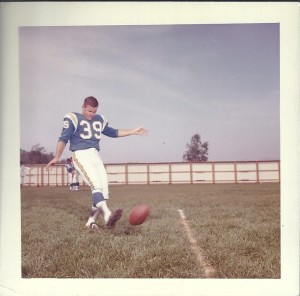 This is a photo of former Chargers defensive back and kicker, George Blair.  The photo was taken during training camp in 1964, at the Chargers training facility in Escondido, California. 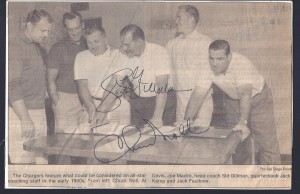 In this day of posters, prints, glossy magazine, photos and countless other items promoting our favorite athletes, it is easy to forget that there was a time when autograph collectors didn’t have a host of mediums from which to choose.  This newspaper photo features an early Chargers coaching staff, and is autographed by hall of fame members, Sid Gillman and Chuck Noll. 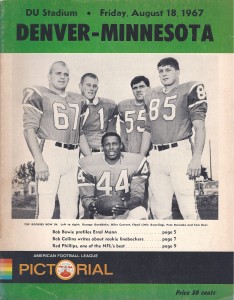 This is a program from the August 18, 1967 preseason game between the Denver Broncos and Minnesota Vikings.  Featured on the cover are Broncos rookies, George Goeddeke, Mike Current, Pete Duranko, Tom Beer and Floyd Little. 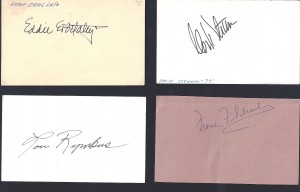 Like the newspaper photo shown above, index cards were once a very popular medium for obtaining autographs.  Their popularity has waned in recent years, as thieves are able to digitally copy the signature on a clean index card and fraudulently apply it to other documents.  As a result, young professional athletes are cautioned against signing index cards.  This group of four has been autographed by 1960 AFL head coaches, Eddie Erdelatz, Hank Stram, Lou Rymkus and Frank Filchock.