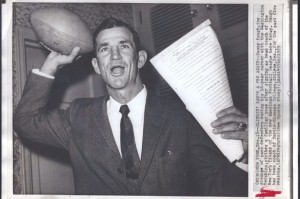 SLINGIN’ SAM’S A PRO AGAIN — Sammy Baugh, the scourge of pass defenders during his 16-year career with the Washington Redskins, strikes a familiar pose after signing as head coach of the New York Titans of the new American Football League here today.  Baugh has been coach of Hardin-Simmons College, Abilene, Texas, for the past five seasons.

Sammy Baugh would last two seasons in New York, during which he led the Titans to a 14-14 record.  BAugh eventlually cut his ties with the Titans due, essentially, to the craziness of owner, Harry Wismer.