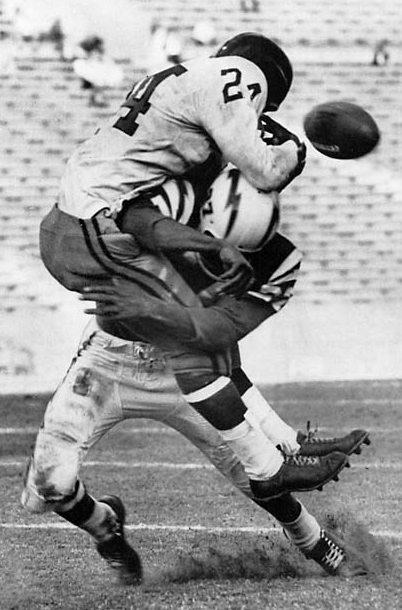 Leon Burton get separated from the ball by the Los Angeles Chargers Charlie McNeil.

I’ve always been intrigued by professional athletes that have very short athletic careers.  There are a host of reasons that an athlete may have an extremely shorts career – injury, no opening at a position, etc. – but occasionally the reason is not overtly apparent.  Such is the case with the New York Titans Leon Burton.

I recently stumbled across the article below by Joe Healey, on the AZ Family website, and was impressed by Burton’s one-year AFL career, which was outlined in the final paragraph of the story.   After taking a bit closer look, I found that Burton had an excellent single season on the special teams, and today would have likely made millions as a “return specialist.”  In 1960, Leon Burton led the AFL in kick off returns (30) and yardage (862).  He finished second in the league in return average at 28.7.  Burton returned two kick offs for touchdowns, and also returned 12 punts for 93 yards.  But then he was gone.

Arizona State has had its fair share of phenomenal playmakers on the gridiron, and during the late-1950s, few players were as dynamically lethal with the football than running back Leon Burton.

Burton came to ASU by way of Flint (Mich.) Northern High School, where he was an all-state football running back and city record-setting track athlete.

His livelihood and athletic future were almost severely compromised by an automobile accident in 1954. However, Burton was able to recover and enroll at Arizona State College in 1955.  By the time his four years were through, Burton would contribute record-setting performances in both football and track and field.

The 5-foot-9, 172-pound Burton showed no rust in his early days wearing maroon and gold as he was named the Border Conference Freshman of the Year after rushing for 694 yards and 10 touchdowns, along with a stellar average of 10.2 yards-per-carry.

Later in the year, in a blowout Sun Devil victory over Hardin-Simmons, he posted jaw-dropping total of 243 rushing yards on only five carries.  At the time, the effort broke Wilford “Whizzer” White’s single-game mark and today stands as the second-best single-game rushing effort in ASU history.

Though injured through parts of his sophomore year, Burton still chipped in five touchdowns for the season.

Back to full health for the 1957 campaign, Burton submitted a spectacular effort on a national scale and one of the premier rushing seasons any Sun Devil running back has ever compiled.

The nation’s leading rusher and scorer with 1,151 yards and 96 total points scored (16 touchdowns), Burton set an NCAA record in 1957 with an average of 9.62 yards per carry. In terms of Sun Devil lore, Burton became the second known 1,000-yard rusher in school history, joining White’s incredible 1950 season.  Making his numbers additionally impressive is that Burton was not the sole focus of the Sun Devil running game as eventual ASU Sports Hall of Fame member Bobby Mulgado also occupied the backfield that year.

An All-Border Conference selection in 1957, Burton was a driving force for ASU’s historic undefeated squad that year in head coach Dan Devine’s third and final season at the helm for the Sun Devils.

As a senior in 1958 under first-year head coach Frank Kush, Burton paced the Devils once again in rushing despite a general dip in productivity compared to his junior year. In all, he collected 642 total rushing yards with 11 total touchdowns on 108 carries and though his rushing total was nearly split in half from the previous year, he again garnered All-Border Conference recognition.

As a whole, Burton posted a career average of 8.03 yards-per-carry, one of the top marks in NCAA history. Burton also recorded 2,994 career rushing yards, at the time ranking him second behind White in school history and currently placing him fifth all-time at ASU.

Burton was drafted in the eighth round of the 1959 NFL Draft by the San Francisco 49ers but opted to play in Canada one season before returning to play for the AFL’s New York Titans.

In his debut season with the Titans, Burton showed the same game-breaking blasts he exhibited for four years in Tempe.  In 1960, he was the AFL leader with two kick return touchdowns, ranked second in the league in kick return average (28.7) and also had a 101-yard kick return for a touchdown, the second-longest kick return in the AFL that season. He also rushed for 119 yards and a touchdown as a rookie.

Burton was inducted into ASU’s Sports Hall of Fame in 1978.