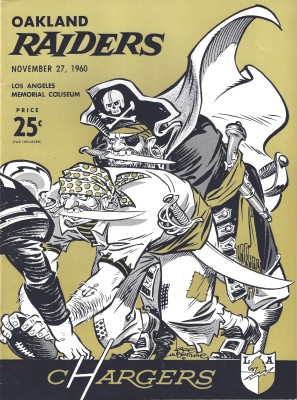 Though dulled in recent years by neither team harboring legitimate playoff hopes, the Chargers and Raiders have clashed in many fantastic games over the years, and thus have constructed a fine rivalry, even if it is only recognized in Oakland and San Diego (and perhaps Los Angeles).  I recently picked up an handful of 1960 Los Angeles Chargers game programs, including one from the November 27, 1960 game, the first regular season contest between the two clubs.

This inaugural AFL meeting was played at the Los Angeles Coliseum, and the Chargers came away with a 52-28 victory, due in great part to Jack Kemp’s 24 pass attempts for 241 yards, and a rushing touchdown each by Kemp, Paul Lowe, Howie Ferguson and Fred Ford.  The full box score can be found HERE, courtesy of pro-football-reference.com