While the Pro Football Hall of Fame has sadly overlooked many AFL players who are deserving of induction, some teams have been honoring those players with inclusion in their own team halls of fame.  In October 2011, New York Jets defensive end, Gerry Philbin, was recognized by the Jets when they added his name into their Ring of Honor. 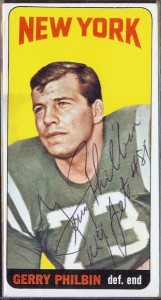 Defensive linemen and linebackers from past eras have a tendency to be overlooked, mainly, I believe, because tackles and quarterback sacks have not always been official statistics.  As a result, it can be difficult to legitimately compare players from these positions.  Still, by all accounts, Philbin was dominant.  A study of game film showed Philbin to have recorded 19 quarterback sacks in 1968 (in a 14-game season), en route to the Jets defeating the Baltimore Colts in Super Bowl III.  When the leagues merged in 1970, Gerry Philbin, along with the Chiefs’ Jerry Mays, was recognized as one of two defensive ends named to the AFL All-Time First Team.

Here are two articles from 2011, covering Philbin’s Ring of Honor Weekend.  The first article covers the announcement of the honor, and the second is a post-celebrations summary of the weekend.