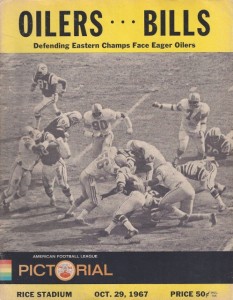 Last week I stumbled across an interesting eBay auction, the title of which caught me eye immediately – “AFL OILERS VS BUFFALO BILLS OCT SIXTY EIGHT AS SEEN IN PRO FOOTBALL HOF RARE.”

I opened the auction page, and found a slight item description, and a couple of photos, one of which showed a small display from the Pro Football Hall of Fame.  The title card for the display read as follows: 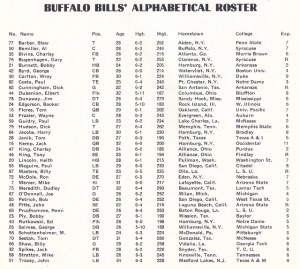 The Buffalo Bills were host to the first African-American siblings on the same team, Charlie and Tony King.  Only 16 months apart in age, Charlie, the elder of the brothers, was drafted by the Bill in 1966 and Tony was drafted the next season in 1967.  On display is a Buffalo Bills vs. Houston oilers game program from October 29, 1967, showing both brothers on the Bills roster.

The seller was asking $14 for the game program, so I clicked the “Buy It Now” button, and awaited shipment of my new little treasure.

I had not before known the significance of this game, and am thankful to have learned about it.  According to a game summary at pro-football-reference.com, the game itself was something of an unexciting defensive battle with five interceptions between the two teams.  Neither Charlie nor Tony King seem to have made much of an impact, but their significance was noted in the historical uniqueness of the game, if not in the box score.