Off Guard – A Book Review

Off Guard – A Book Review 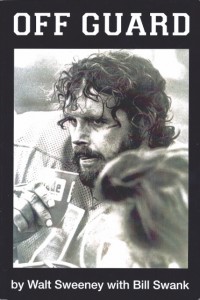 Walt Sweeney was the San Diego Chargers first round draft choice in 1963.  During his 13-year career in the AFL & NFL, Sweeney was voted to nine consecutive All-Star/Pro Bowl teams (1964-1972).  He was named to the AFL Alll-Time Second Team, the San Diego Chargers 50th Anniversary Team, and was inducted into the Chargers Hall of Fame.  He is one of the former AFL players most deserving of recognition by the Pro Football Hall of Fame.  Walt Sweeney accomplished all of this, and much more, as a rabid alcohol and drug abuser.

Walt Sweeney’s autobiography, Off Guard, which he co-wrote with Bill Swank, was released last month.  The book, which Sweeney wrote over the course of many years, reaches back to his early years in Cohasset, Massachusetts, and carries on through to the death of his wife, Nanci, in early 2012.  In between is the story of a man who found great success on the football field, while struggling miserably with life outside of the game.  While Off Guard contains some anecdotal stories about the Chargers and the American Football League, the meat of the book concerns the daily struggle that Sweeney had with drugs and alcohol, and how these struggles shaped the course of his life.

I like Walt Sweeney very much.  Now in his 70s, his laid back attitude mirrors that of his adopted home of Southern California.  Because of my appreciation of Walt, I found this book difficult to really “enjoy.”  Off Guard is the story of an addict; Sweeney tells his readers as much time and again, as though the stories alone did not convey the message.  Knowing this, however, does not make it any easier to read about the stranglehold that alcohol and drugs (both recreational and team-supplied amphetamines and pain medication) had on Sweeney’s life.  After decades of drug abuse, Sweeney spent years in-and-around drug counseling programs and rehabilitation centers, yet it still took years of involvement with these facilities to break him of his addictions.

This book helped me to better understand the deathhold that these substances can have on individuals.  While Walt discusses the types of drugs that he received through the Chargers, he does not lay ultimate blame for his addictions on the team.  Certainly, there are pages devoted to his lawsuit against the NFL for the damages he received due to team-dispensed drugs, but Sweeney freely discusses his personal weakness for alcohol that started well-before he began playing professional football.  Additionally, his introduction to, and abuse of recreational drugs is clearly detailed.

Frankly, I wouldn’t even call Off Guard a football book.  While the main subject was a professional football player, and much of the book takes place in-and-around the game, this book is more a testimony to the dangers inherent in drugs and alcohol.  As such, it is a valuable read for anyone who may be a substance abuser, or has one in their lives.  And in that realm this is not manual to show the way to break a dependency.  Rather, it is an illustration of how difficult the struggle can be.  If you are looking for a good, history-based football book, then I will tell you to steer clear of Off Guard.  However, if you are interested in learning about the grip that addiction can have on an individual, and how difficult that addiction can be to overcome, then I would suggest that you take a look at Off Guard.  It is a book worth reading.