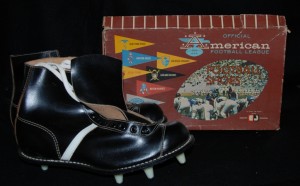 Several years ago an eBay seller out of Chicago was auctioning some dead stock from an old sporting goods store.  He was selling various sports-related items over the course of several weeks.  One particular item, of which he had six or seven, was an unused pair of “Official American Football League Football Shoes.”  The hightop cleats were produced by the Endicott Johnson Company, and originally sold for $8.95 a pair.  The photograph on the front of the box shows a Chargers vs.Raiders game from 1961, either the August 27th preseason game, or the September 27th regular season contest, both of which were played in Balboa Stadium.  Therefore it is safe to assume that the cleats were distributed in 1961-62, as the banners on the box feature the New York Titans and Dallas Texans, both of which had changed their names by 1963.  Additionally, the Oakland Raiders banner is colored in black and gold, which Al Davis changed upon taking over the head coaching position, also in 1963.

The eBay seller sold one pair of these cleats each week for six or seven weeks.  I recall this pair costing me roughly $35.00.  I do not believe that I have seen any others for sale since.