Olympians in the AFL

Olympians in the AFL

After a good suggestion from my friend, Jim Steeg, and with the 2012 Olympic Games coming to a close, I thought this would be a great time to mention the four former Olympians that also spent time in the American Football League.

Stone Johnson was a sprinter on the U.S. team for the 1960 Olympic Games in Rome.  He did not medal.  Johnson had a tryout with the Kansas City Chiefs three years later.  In an exhibition game against the Oakland Raiders on August 30, 1963, Johnson suffered a broken vertebra.  He died 10 days later, on September 8, at the age of 23. 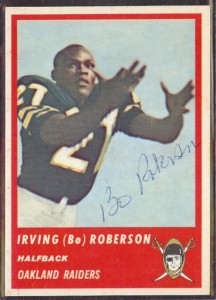 After his standout athletic career in basketball, football and track & field at Cornell University, Bo Roberson earned a silver medal in the long jump at the 1960 Olympic Games.  His leap was just one centimeter short of Ralph Boston’s gold medal-winning jump of 8.12 meters.  Roberson played seven years in the AFL, with the Chargers, Raiders, Bills and Dolphins.

Jim Hines, a sprinter out of Oakland, California, was the first man to break the 10-second barrier in the 100 meters race, when he did is at the U.S. National Championships in 1968.  A few months later, Hines was competing in the 1968 Olympic Games in Mexico City.  Hines won the gold medal in the 100 meters, and also as a member of the 4×100 relay team.  Though he had limited football experience, Hines was drafted by the Miami Dolphins in the sixth round of the 1968 draft.  He spent the ’68 season on the taxi squad, but appeared in 10 games in 1969.  Hines’ football career ended after playing in a single game for the Kansas City Chiefs in 1970. 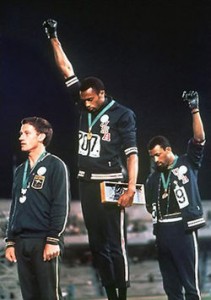 Tommie Smith won a gold medal  in the 200 meters in the 1968 Olympic Games, and later provided one of the most enduring images in Olympic history when he and fellow American, John Carlos, standing on the podium with and wearing their medals, raised their fists in a “human rights salute.”  After the ’68 Games, Smith joined the Cincinnati Bengals, with whom he spent three seasons, though he only saw action in 1969.
By Todd Tobias|2012-08-13T06:18:16-07:00August 13th, 2012|AFL, American Football League|20 Comments