On My Parents’ Wall…

On My Parents’ Wall… 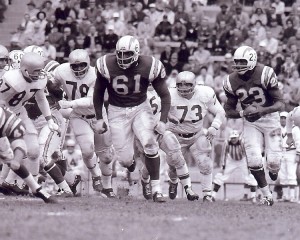 Guest blogger, John Freeman, has a unique perspective on the AFL and in particular, the 1960s Chargers.  His father, Don Freeman, has covered many subjects (including sports) for the San Diego Union and Tribune newspapers for several decades.  John also has a sports-writing background, and at one time was a ball boy for the early Chargers. 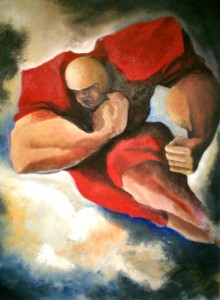 He’s been there, up on the wall, since about 1963 when my father, Don Freeman, agreed to buy one of his first paintings for the discounted price of $100.

Seems Ernie, then with the Chargers, needed a few bucks, so the informal deal was struck. To this day, that bright orange, imposing fullback with the bulging forearms and tiny football adorns my parents’ family room.

Back in the early 1960s, Barnes was with the Chargers, first in Los Angeles and then in San Diego, a journeyman offensive lineman who wore jersey No. 61. He didn’t have an especially distinguished career, but after he retired from the game his artistic career flourished to great heights.

By the 1970s and beyond, his works had been purchased by Bill Cosby, Sidney Poitier, Harry Belafonte, Charlton Heston and other celebrities.

During that time, Barnes’ highly stylized works became the centerpiece for a number of popular, black-themed sit-coms, led by “Good Times” and “Cosby.” He served as the official artist of the ’84 Summer Olympics in Los Angeles. One of his paintings served as the cover for a Marvin Gaye album.

Here’s how Ernie Barnes was eloquently described by the Los Angeles Times upon his death in 2009 at age 64: “… a former professional football player who became a successful figurative painter, known for depictions of athletes and ordinary people whose muscled, elongated forms express physical and spiritual struggles.”

Turns out that Ernie, a gentle fellow at heart, wasn’t all that fond of playing football.

As the Times’ obit read: “His works from his (early) period were often commentaries on the brutality of professional football, depicting players with fangs and other grotesque features.”

Grotesque? Not to me. I love that painting.