One of my Favorite AFL Inserts Sets

Home/AFL/One of my Favorite AFL Inserts Sets
Previous Next

One of my Favorite AFL Inserts Sets 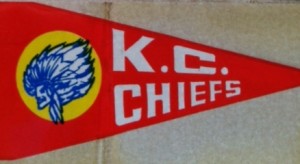 “The Captain” Bob Swick, editor and publisher of Gridiron Greats Magazine, football memorabilia guru, and all-around good guy, penned (or typed, as the phrase may have morphed over the years) this piece on a very challenging insert set that was included in packs of 1964 Topps football cards.  I don’t have any of these pennants yet, but once I finish a few more signed sets, I may just jump into them!

In 1964 Topps produced a 176-card set for the American Football League.  Over the years I completed this set rather quickly and put together several duplicate sets also.  However back in 1964 one of the toughest insert sets was produced in my opinion and placed into these same 1964 Topps AFL Football wax packs.  The 1964 Topps Pennant Stickers were a 2 1/8” x 4 ½” peel off sticker of the eight AFL teams along with sixteen major football colleges at that time.   It was not uncommon at that time that one would actually peel off the sticker and place it on your school notebook, your wall in your room, on your bike or any other number of places rather than put it away and save it.  I actually had one on my school folder back in third grade a few years after they came out.  Thus I have always wondered how many of these inserts actually survived over the years?  The background colors of the pennants were either red, white, blue or yellow with a different color typeface than the background.  The glassine surrounding the pennant was a dull gray.  A small team logo/mascot was shown in a circle to the left of the team name.  They came folded in the packs thus I have never have seen one which did not have fold marks to it.

The set is a costly endeavor whether you are collecting just your favorite team or the complete AFL or master set.  The AFL teams can run anywhere from $40 to $90 each depending on condition while the college teams can run from $25 to $50 also depending upon condition.  The master set can run from $650 to as high as $1500.  Graded pennants are also more costly.  I am collecting this set in ungraded condition.

If you are an AFL fan of the Patriots, Bills, Broncos, Oilers, Chiefs, Jets, Raiders or Chargers or of the AFL in general this set is for you.  Hopefully one day I will find the rest of these pennant inserts for my set.