I put this together a few years ago when I wanted to see how Otis Taylor stacked up against hall of fame receivers.  In my mind, Taylor is another AFL player who has been snubbed by the hall of fame voting committee. 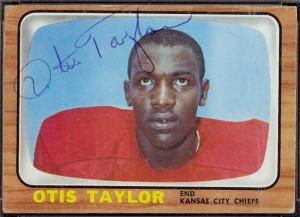 “Well, first of all, [Otis] deserves to be in because when you talk about an era of football players that he played in he was as good, or better than all of them. He was the first, or one of the first big men, I’m saying that he was about 6’3”, 215 or 220 pounds with sprinter’s speed and just a tremendous athlete.” – Len Dawson, Kansas City Chiefs Quarterback and Hall of Fame Member

Drafted by the Philadelphia Eagles in the 15th round of the 1965 NFL draft, 203rd overall.

Drafted by the Kansas City Chiefs in the 4th round of the 1965 AFL draft, 29th overall.