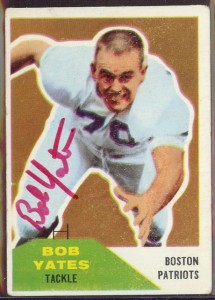 A native of Montpelier, Vermont, Bob Yates was a 6’2″ and 240-lb offensive lineman when the Boston Patriots drafted him out of Syracuse University in 1960.  Yates played six seasons for the Pats, at center and offensive tackle.  He went into coaching shortly after retiring as a player, and spent the next 30 years in the game at the high school and college levels.

Tales from the American Football League reader and longtime Vermont resident, John Bennett, sent in a note to that Yates will soon become an inaugural member of the Vermont Sports Hall of Fame when he and 12 other honorees are recognized on November 17th.

Bob Yates retired to Texas in 1998, but is still a strong supporter of his old team.  He still returns to New England for Patriots alumni gatherings, and to cheer on his team.