Paul Lowe Recalls his Start with the Chargers

Paul Lowe Recalls his Start with the Chargers 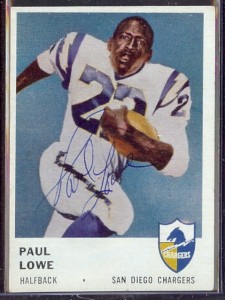 Like many of the players that found their way onto AFL rosters in that inaugural season of 1960, Chargers running back Paul Lowe’s path into professional football was not a direct one.  He had been drafted by the San Francisco 49ers of the NFL, but was cut in training camp.  After spending time working jobs outside of football, Lowe got an opportunity to try out for the Los Angeles Chargers of the upstart American Football League.  He became an instant star with the Chargers, after he ran back the opening kickoff 105 yards for a touchdown in the Chargers first-ever preseason game on August 6, 1960.  Paul Lowe continued to have great success in 1960, and after rushing 136 times for 855 yards and eight touchdowns, he was named the Chargers Best Offensive Back for 1960. 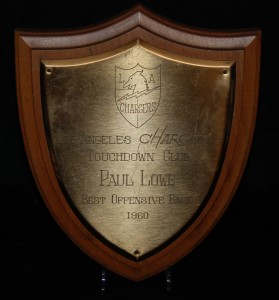 In an interview conducted in 2003, Paul Lowe discussed his circuitous route to the Chargers and professional football stardom.

I’ll tell you how I got to the Chargers and into professional football.  I was with Oregon State, and every year we played Cal.  I would have a good season, a good year.  I would make some long runs against Pappy Waldorf.  He was the coach at Cal, but he was a scout for the 49ers also.  He liked the way I played and he approached me one day and said, “What are you going to do after you finish your college?”  Well, I didn’t get to finish college.  He said, “When you do, you get in touch with me.  I’d like to see you play for the 49ers.”  So I gave him a call after I left school and he gave me a contract with the 49ers.  That was in 1959.  I was real happy about it, and I had a successful preseason with the 49ers, but I got hurt when we went to Utah to play the Giants.  We had a preseason game there, and I got injured and I got released.  I went home.  My home was in L.A., and I needed a job because I had a family at the time.  I had four kids.  So I went and got a job.  The job happened to be at the Carte Blanche Credit Card Corporation, and that was owned by the Hiltons.

Mr. Frank Leahy was the general manager [of the Chargers] at that time and they were forming a football league.  They found out that I was in the mailroom at the time.  That is where my job was.  They got in touch with me, and asked me if I wanted to play professional football.  I told them, “Sure.”  So that’s how I really got started with the L.A. Chargers.  Then shortly after that Frank Leahy resigned and then Sid [Gillman] took over the organization.  Sid remembered me from when I played for the 49ers because I made a couple of kick off returns and punt returns against the Rams, which had impressed him.  So they asked if I wanted to play and I said, “Yeah.”  I was invited to camp and all that, and that’s how I got started with the Chargers.