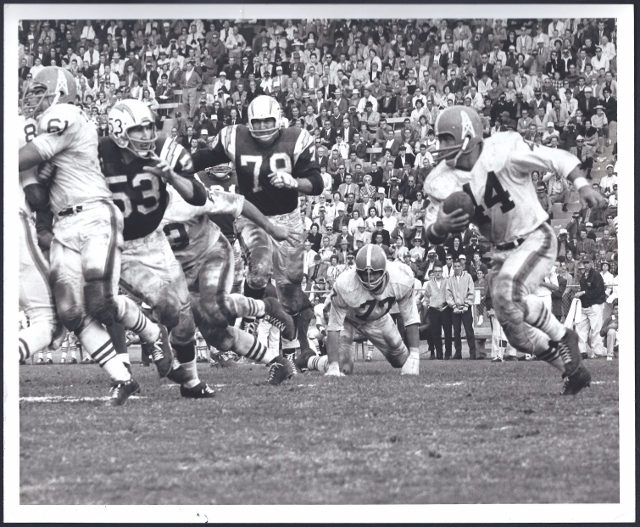 Much has been said (especially since my recent photo postings) about Super Bowls I-IV.  They are fantastic subjects for debate, individually or collectively.  Great players, hall of fame coaches, big plays and ultimately, a 2-2 record between the leagues.

Not nearly as much is said about the world championship games that would have been played if the two leagues had arranged postseason contests beginning in 1960.  1960 Oilers vs. Eagles?  1963 Chargers vs. Bears?  Which AFL team would have been the first to knock off an NFL champion?  Or was the AFL simply not up to the NFL standard early on, as so many NFL enthusiasts like to shout from the rooftops?

Over the next several days we will run through the AFL-NFL Championships that never were, or as I am calling them, the Pre-Super Bowls.  I will post the vital stats, and you all provide the commentary.  Let’s see who most people think would be the first AFL team to be crowned, “World Champions.”

Coached by the great Vince Lombardi, the 1961 Packers won the first of Green Bay’s five NFL titles during the 1960s.  On offense, the Packers were led by quarterback Bart Starr (HoF), with Paul Hornung (HoF) and Jim Taylor (HoF) in the backfield.  The Packers were tough on the line as well, with Jim Ringo, Jerry Kramer and Forrest Gregg maintaining a tough right side of the line.  They were no weaker on defense, with five more hall of famers in their starting line up.  The ’61 Packers were +20 on turnovers, and scored 168 more points than they gave up.  They defeated the New York Giants 37-0, in the 1961 NFL Championship Game.

Wally Lemm took over the Houston Oilers midseason, after Lou Rymkus and Bud Adams had one-too-many disagreements.  Despite their unrest at the head coaching spot, the Oilers still finished first in scoring and yardage in the AFL in 1961.  They were led by HoF quarterback, George Blanda, who threw to Charlie Hennigan and Bill Groman, both 1,000+ yardage receivers.  Billy Cannon, Charlie Tolar and Dave Smith made up the running game. Houston was solid, if not star-studded across both lines.  The defense hauled in 33 interceptions, and gave up 271 fewer points than the offense scored.  Again the Oilers faced the Chargers in the championship game, which they won by a score of 10-3.

Like the Oilers of 1960, the ’61 squad was just getting it’s feet wet as a team.  This team had no quitters, and they would have put up a fight.  Still, the Lombardi-led Packers were just coming into their prime in a period when they were nearly unbeatable.  I think the ’60 Oilers may have beaten the Eagles, but I don’t know that the ’61 squad had much of a chance against Green Bay.

To add a bit of interest, AFL author, Dave Steidel, ran a simulation of a 1961 Super Bowl on PCAction Football.  The game came out with the Oilers coming back from a 21-27 deficit to hand Lombardi and Co. their second championship game defeat, 30-27, on three unanswered George Blanda field goals.