Pride, Poise and a 9 Game Turn Around – The 1963 Oakland Raiders

Pride, Poise and a 9 Game Turn Around – The 1963 Oakland Raiders 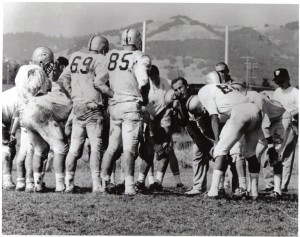 The Oakland Raiders went from the AFL’s basement to knocking on the penthouse door in just a single season.  Dave Steidel discusses what brought about the drastic team turnaround…

Davis, the boy genius fresh out of Sid Gilliam’s coaching paddock, left no stone unturned on his quest to lift the Oakland franchise out of the AFL’s crypt and transform its image from rag-tags to juggernauts.  Since their inception the Raiders had finish 6-8, 2-12 and 1-13 under three different head coaches.  What Davis was bringing to the bay area was first and foremost a plan with an upward direction, stability and in his words “a commitment to excellence”.  He brought in a new offensive philosophy, preached, taught, modeled and demanded Pride and Poise under all conditions and started the season with 19 new players, more than half his team.  He even cut his two starting tackles, Charlie Brown and Jack Stone a week before the season began because he was dissatisfied with their performance in pre-season games.

His attention to detail and game preparation was unlike anything the Raiders had seen before.  And his philosophy for winning was unequalled.  After defeating the Oilers in their season opener the Oakland locals were also catching on to Davis’ philosophical addiction for winning by increasing their previous attendance record at rickety Frank Youell Field by 30% for their home opener against the Bills.  Davis’ Pride and Poise boys did not disappoint, knocking off the Bills 35-17.  In 1962 the Raiders scored more than 21 points only one time.  Under Davis they had already done it twice in their first two games.

But when Boston arrived the next week the Patriots were more prepared to face the resurgent Raiders than their first two victims.  In their last meeting, the final game of 1962, the Patriots became the first and only team in the AFL to be shut out all season, by the team that hadn’t won a single game to that point.  Now, coinciding with star halfback Clem Daniels sitting out with a deep thigh injury, the Raiders were caught short 20-14.  Then on their three week sojourn east, still without Daniels, the results were the same, losing in New York 10-7, Buffalo 12-0 and Boston 20-14.  Returning to the west coast with a 2-4 record, the new Raiders were suddenly looking like the team of old, with another turn around team, the Jets (3-2), scheduled to visit Youell Field the next week.  With Daniels back at full strength and running for team record 200 yards the silver and black set a franchise record by scoring 49 points enroute to their third victory.  Next up was a trip down the coast to take on the 5-1 Chargers.  A team they lost to six straight times in three years.

Through their first seven games Davis had employed a two quarterback rotation depending on his needs at the time.  Tom Flores and Cotton Davidson both had strengths and short comings, and when one would struggle, the other would pick him up.  Flores specialized in throwing deep while Davidson threw more of a mid-range frozen rope.  In San Diego, it was Davidson getting the call again to pick-up the struggling Flores.  Behind 23-14 in the third quarter Davidson connected with flanker Dobie Craig and then Art Powell for touchdowns after a Charger field goal, to retake the lead 28-26.  The lead changed hands again after Keith Lincoln out ran the Raider defense for a 51 yard score, giving the Chargers a 33-28 lead.

As his new team was hanging on tightly with the two time division winners, Davis wanted nothing more than to take down his old San Diego mentor, and with less than two minutes left in the game the chance arrived. On their last possession Daniels converted a draw play into a 41 yard gain, giving Oakland a goal-to-go situation at the Charger 9.  A quick strike over the middle from Davidson to flanker Glenn Shaw brought the lead back to Oakland 34-33 and sealed the Raiders first ever win over the Chargers.  It also put the rest of the AFL on notice that Davis’ gang, sitting on a 4-4 record, one more than the posted in last two seasons combined, was for real!

Back-to-back wins over Kansas City followed and then win number seven came in Denver.  The Raiders had just run off five wins in a row, were sitting on a 7-4 record and trailed the division leading Chargers by only two games with three to play, including another California show down at Youell Field the next week.  A San Diego win would clinch the division title for the Chargers and Davis was determined to not let that happen, especially on his own turf.

If Sid Gilliam’s San Diego team was the measuring stick for passing excellence in the AFL, then the Raiders were now on equal ground.  For the season the Raiders trailed San Diego by only 44 total yards passing and had three more touchdown completions.  A year ago, the team Davis had taken over, would have had trouble winning an inter-squad game, but was now transformed into one the league’s top performers and were challenging for the top spot in their division.  They were Art Powell scoring a league leading 16 touchdowns, Olympian Bo Roberson and Ken Herock complementing each other with speed and strength as the receiving corps.  There was halfback Clem Daniels leading the league in rushing while setting league record 1,099 yards in only eight games, and Alan Miller catching 34 passes out of the backfield.  A revamped offensive line was made up of retreads Dick Klein and Proverb Jacobs at tackle, young bull-workers Wayne Hawkins and Sonny Bishop with veteran Bob Mischak at guard.  And as always the best center in the league, Jim Otto in the middle.  All were led by the quarterback duo of Flores and Davidson who together threw 31 touchdowns passes and gained 3,377 yards through the air.

The defense line, deemed by some to be too small to take on the league’s big boys was anchored by rookie all-star Dave Costa and Craig McMurty in the middle with all-league strong man Dalva Allen and Dan Birdwell on the ends.  The linebacking trio boasted all-star Archie Matsos in the center, flanked by Clancy Osborne and Charley Rieves with all-leaguer Fred Williamson and Claude Gibson on the corners backed at safeties Joe Krakoski and all-leaguer Tom Morrow.  The defense, long a dysfunctional band of ragamuffins, had been forged, in typical Davis style, into a team whose sum was stronger than the parts it was constructed from.  The Raider defense had risen from the bowels of the league into the top tier.  They were second in the league against the pass and fourth best against the run, with much of their success devised by their 34 year old boy-wonder head coach who diagramed a scheme of blitzes that the other seven teams were not ready for.

Their biggest game of the season upon them, the Raiders greeted the Chargers on December 8 in a cooler than normal 48 degrees at Youell Field.  Pre-game prognosticators were calling the game a toss-up as the Chargers found the end zone first and took a 20-10 lead into the locker room at the half.  They increased their lead by 7 in the third quarter when Tobin Rote threw his third touchdown pass of the day and gave the Chargers a 27-10 lead as the teams traded sides for the last time.  And then the Pride and Poise boys took over.  In the last twelve minutes the commitment to excellence was never more prevalent as the Raiders created five San Diego turnovers and scored 31 unanswered points to win 41-27 and send the Chargers home with their lightning bolts between their legs.

The Raiders had closed the gap for the division lead to one game with two to play, but they could not catch the leaders.  San Diego went on to beat Houston 20-14 and Denver 58-20 and finished the season 11-3. Oakland also won their last two games, their seventh and eighth in a row against the same Broncos 35-32 and Oilers 52-49 to end up 10-4.

The transformation of the league’s worst team in 1962 to AFL second best record in 1963 was nothing short of inspiring. Davis had made his mark in one short year and was determined to improve upon it.  His commitment to excellence philosophy was now embedded into the Raiders fabric and their Pride and Poise motto entrenched in every player. In the end, their nine game turnaround was not enough to win the West, as San Diego went on to win the AFL championship game over Boston.  And while Chargers became the best team in the AFL, Al Davis and his Pride and Poise boys laid claim to being the best AFL team in California, as the only team the champion Chargers could not beat in 1963.