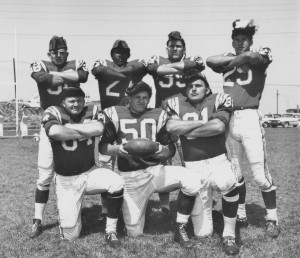 The 2012 Chicago Bears defense is intercepting passes as a reckless pace this season.  Six of their 16 interceptions thus far in 2012, have been returned for touchdowns, which puts the Bears on pace to break the San Diego Chargers record of nine “pick-six” interceptions in a single season, a record the team has held since 1961.  The Pro Football Hall of Fame talked about the 1961 Chargers in an online article that they released just yesterday: INTERCEPTION BRIGADE 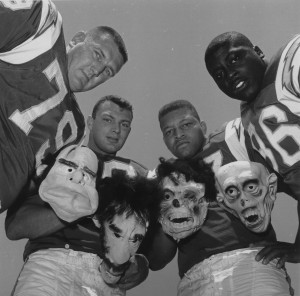 The article contains a lot of good information.  With articles like these being so rare, I would have liked to have seen a bit more description of the 1961 Chargers.  For example, 1961 was the year that the Chargers first used the term, “Fearsome Foursome,” to describe their mountainous defensive line that included Ernie Ladd, Earl Faison, Ron Nery and Bill Hudson.  Their relentless pass rush greatly aided the defensive backfield in setting this record.  Also, the linebacker and defensive back corps had a nickname of their own.  They were dubbed the “Seven Bandits.”  Great and colorful stuff, exactly what you might expect from an upstart league to whom marketing and public relations were essential to their existence.