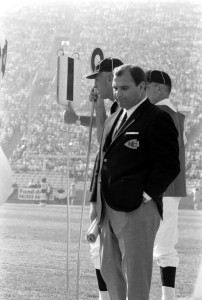 I was looking around the internet the other day, searching for information on the Chiefs postcards that I recently wrote about, when I came  across a site called Vintage Everyday.  The site features article on all sorts of historic topics, and is something in which readers can easily lose themselves for hours.  The particular article that caught my attention, however, showed a number of rare photographs of the first AFL-NFL World Championship Game (Super Bowl I), taken by a photographer for Life Magazine.  The photo that I found most interesting was a shot of a downtrodden Hank Stram.  It was just such a drastic difference from the way the normally ebullient coach was typically portrayed.  Enjoy!