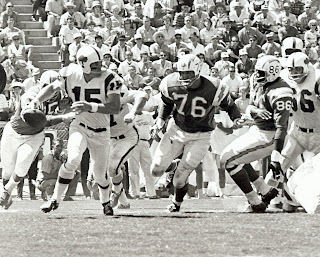 Down the road from our home is one of my favorite places to go for breakfast, the La Mesa Bistro & Bakery.  If you happen to roll into the Bistro on a Wednesday morning, you are likely to see a group of older gentlemen occupying a large table in the back room.  They are all retired, and meet each week to have breakfast and enjoy each other’s company.  One neat thing that they do is for each meeting, a member of their group will bring an item from home to share and discuss.  It may be a tool used during their career, a photo from a past occasion, or a souvenir purchased on a special vacation.  But the item is passed around, discussed and enjoyed by all. 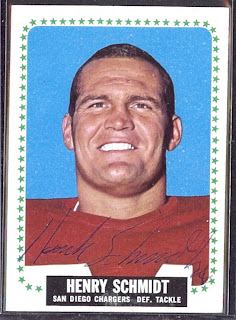 One of the men that is part of this group is former AFL’er, Hank Schmidt.  Hank was a tough defensive lineman who joined the Chargers in 1961, after spending time playing in the Marine Corps and then for the San Francisco 49ers.  Schmidt played for the Chargers through the 1964 season, then spent the 1965 season with the Buffalo Bills, and 1966 with the New York Jets.  Though he was not as well-known as his Chargers linemates, Earl Faison and Ernie Ladd, Schmidt was a solid player that excelled in the physical aspects of the game, and was a great contributor to the Chargers special teams.  In fact, when Sports Illustrated’s famed football writer, Dr. Z, selected his All-Century Team in the August 30, 1999, issue of SI, he added only five specialists to this “Greatest of all Teams.”  One of the five specialists was Hank “Henry” Schmidt, whom he chose as the greatest wedge buster in professional football history.  After football, Hank entered the insurance business, where he was a longtime agent in San Diego.
Knowing where I could find Hank and his buddies on Wednesday morning this week, I scanned through my collection of AFL Chargers photos, and printed about a dozen different 8x10s of Hank Schmidt.  When I arrived at The Bistro at around 8:30, the group was laughing and enjoying their breakfast.  I walked over to their table, introduced myself, and gave Hank the sack of photos.  “I just thought you might like these,” I told him, and then left them to enjoy their meal.
Hank’s group broke up a little while later, and on their way out the door, several stopped by my table to thank me for bringing the photos.  “Hank really enjoyed them,” they said.  “In fact, most of them he had never seen before.”
It was a fun connection, and a real reminder to me of how these AFL players were really just everyday guys, who enjoyed their sports careers, and then assimilated into the regular world.  Today, most are very happy to be remembered as former athletes, and enjoy the opportunity to stroll down memory lane. 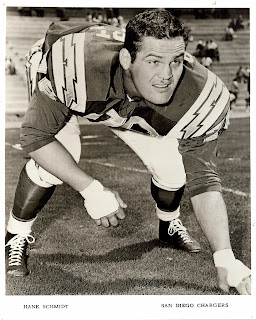