Sid Gillman; Father of the Passing Game – A Book Review

Sid Gillman; Father of the Passing Game – A Book Review 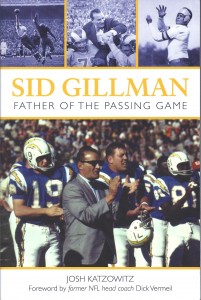 As someone whose introduction to the AFL came when I wrote my master’s thesis on Sid Gillman, I was excited to learn that a book had recently been published about Sir Sidney.  Sid Gillman: Father of the Passing Game by Josh Katzowitz, was released on Amazon this past week.  Published by Clerisy Press, the 322 page book covers Gillman from his birth in 1911, through his passing in 2003.

Sid Gillman is an interesting figure.  Although commonly known as one of the greatest offensive football minds of all time, he is typically overlooked when praise is being doled out to the great coaches in history.  Katzowitz postulates that Gillman’s omission is such conversations could be due in part to his never winning a Super Bowl, which makes sense.  Another possibility that the author discusses in-depth, is that as a person, Gillman could be very difficult to get along with.

Sid Gillman had a passion and intensity about football that I suspect is unique, even among football coaches.  Gillman’s work ethic is legendary, with 16-18-hour work days a normal occurrence.  He made personnel decisions with impunity, and had no problem berating a player in front of his teammates.  As a general manager, Gillman was ruthless in contract negotiations, Katzowitz made the point more than once that some of Gillman’s greatest players either refused to speak on record about their old coach, or simply failed to return his many phone calls.

Gillman, however, was not the embodiment of evil, and in fact was a complex figure.  Katzowitz explores the discrimination that Gillman faced as a Jew, privately in his hometown of Minneapolis, as a collegiate at Ohio State, and in his career as a coach at the college and professional levels.  The author goes deeply into Gillman’s family dynamics, and does a very nice job of illustrating the deep love that Sid had for his wife, Esther, and their four children.  In fact, the Gillman’s four children were main sources of information for Katzowitz, and he quotes them liberally throughout the book.

While not a coach himself, Katzowitz does a good job of breaking down Gillman’s theories on offensive football, in a manner that can be understood by the lay person.  As well, he shows how these theories have been woven into the fabric of the modern game, and just how important Gillman’s work has been in making the game what it is today.

One thing that I had hoped for more of in Sid Gillman: Father of the Passing Game, was anecdotal stories of the American Football League.  As a study on an individual, perhaps the author did not feel them appropriate.  But although San Diego represented the longest coaching assignment of his career, I felt that the book fell a bit short in really fleshing out the story of Gillman’s days with the Chargers.  Perhaps it is a result of my personal interests, but I would have liked to see a bit more detail about this part of his career.

In the end, I appreciate the work Josh Katzowitz did in telling Gillman’s story.  I knew Sid Gillman reasonably well, but I walked away from this book with a better understanding of the man.  If football fans are looking for a fresh, new read this season (or their loved ones are looking for a great holiday gift!), Sid Gillman: Father of the Passing Game will educate and entertain thoroughly, which in my mind, is the mark of a good book.