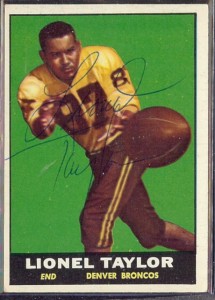 Recently, Brian Shrout, a writer and Broncos fan at the Mile High Report (www.milehighreport.com) put together a nice piece on Lionel Taylor, one of the first great Broncos players.  As we have discussed before, Taylor’s star was dulled somewhat because of the poor Broncos teams for which he toiled.  Still, you cannot argue with the statistics, and Taylor’s are great.  Enjoy!

There were four initial inductees to the Ring in 1984. They were safety Austin “Goose” Gonsoulin (1960-66), defensive end Rich Jackson (1967-72), running back Floyd Little (1967-75) and wide receiver Lionel Taylor (1960-66).  Many of us may not remember that Lionel Taylor did not start out as a football player — he played basketball and ran track for New Mexico Highlands University. The first football job he held was as a linebacker  for the Chicago Bears in 1959. He appeared in just eight games for the Bears and amassed no statistics.

Taylor made a significant move in 1960 when he jumped to the newly formed American Football League and joined the Denver Broncos. According to Jim Saccomano, in his book

Then in 1961, Taylor accomplished something which had never been done before by a professional football wide receiver: he caught 100 passes in a single season. It is important to remember that prior to 1978 both the AFL and the NFL played fourteen game seasons.

This is very remarkable when we consider that since the NFL began play in 1920, only 76 players have ever eclipsed the century mark in receptions (this data is drawn from pro-football-reference.com and includes wide receivers, running backs and tight ends). As an interesting footnote, the second player to catch 100 or more passes was Charley Hennigan of the Houston Oilers in 1964. After that, the NFL had to wait twenty years until the Washington Redskins Art Monk accomplished the feat in 1984. Fifty of the seventy-six players have done so since 2000.

Let’s get back to Taylor, however, since he was the first to accomplish this feat. His 1961 season, when individual games are examined, does not look all that remarkable. He only had two games with double digit receptions and only three games with touchdowns.

This would prove to be the second of four seasons as a Bronco in which Taylor topped the 1000-yard mark in receiving yards. In fact, Taylor averaged 84.7 catches per season during his seven years as a Bronco.

Sadly, 1961 was not a good season for the Broncos overall, as they went just 3-11-0 for a 4th place finish in the AFL West. While Taylor was outstanding for the Broncos in receiving, the Denver quarterbacks (Frank Tripucka and George
Herring) were not, throwing a combined 43 interceptions to just 15 touchdowns.