George Pernicano, minority owner of the San Diego Chargers, and personality extraordinaire, passed away last week at age 98, after a long illness.  For those that knew him, George Pernicano was larger than life – all five-foot nothing of him.  But what he lacked in stature, he more than made up with in personality, fun, stories and food.  George Pernicano was a legend in these parts, and his shoes must just be put away forever, as they could never possibly be filled.

Longtime Chargers fan and occasional guest blogger, John Freeman, put together a wonderful tribute to Pernicano last week, and was kind enough to share it with us now. 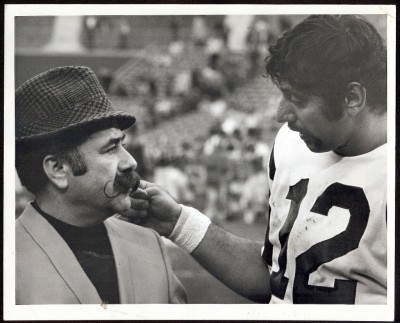 Any way you slice it, George was San Diego’s Pizza Man

There’s no way I could approach Nick Canepa’s lovely Union-Tribune Sports tribute to George Pernicano, who has passed away at 98.

No surprise that Nick masterfully captured the essence of George, the walking/talking/eating/drinking embodiment of what it meant to be a Chargers fan (heck, a San Diegan) in the early to mid ’60s and beyond.

That twirled handle-bar mustache, insured with Lloyd’s of London for what was then the outrageous sum of $50,000. Those cigars. Those terrific pizzas. That ebullient charm, with more than a hint of bad boy. Dad always loved the line (from Jack Murphy?) that George looked like the guy who drove the getaway car.

As a kid, it was always a treat to open up the fridge the morning after my parents had gone to Pernicano’s. (Many times, too, they took me and my buddies). There, staring back at me, was the evidence — a few leftover slices of cold, exceptionally tasty pizza. Nothing better. Hot or cold, George’s pizza was the best I’ve ever had, then or since.

My father (Don Freeman, longtime columnist) loved that George always claimed he introduced pizza to San Diego of the late 40s, maybe early ’50s, and surely a more tame gastronomic outpost back then. Of course, starting in ’61 when the Chargers moved here, he bought from Barron Hilton a precious slice (what else?) of the franchise, a full 1 or 2 percent, it was said, maybe more. Worth millions today. Loved the legend that George stubbornly refused to sell that share to team patriarch Alex Spanos and before that, Gene Klein.

These days, all I have to do is mention George’s name to Dad and he lights up, distant memories dancing. He loves to recall the time on a Charger road trip to San Antonio (early ’60s preseason) when he and George (others, too, likely the great Jerry Magee) went to an “Italian” restaurant. At the end of a decidedly un-Italian meal that didn’t meet George’s standards (few places did), they ordered Spumoni and got served Neopolitan instead. Outrageous!

In that simpler meat-and-potatoes era, not everyone had George’s refined, perhaps too demanding tastebuds. But a select few did, especially when he’d hold forth at his Casa di Baffi (House of the Mustache) with the likes of Jackie Gleason, Curt Gowdy and Joe Namath, so many others. This was San Diego’s Toots Shor’s celebrity hangout, with George as Toots. With flourish and bombast, George would “help” his personal chef prepare whatever he had ordered for the entire table. Or the entire restaurant. Man, that thick, heavily peppered pork chop was something to behold. 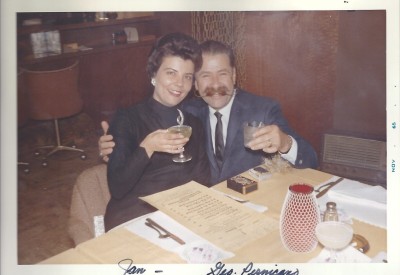 This was the bygone scene: Big shots from the big city regaling the locals, puffing cigars, over-eating George’s finest and imbibing to late-night excess, but who cared? Dad was a regular observer. I was too young to tag along for those ribald sessions, though as I say, our family often went to Pernicano’s in Hillcrest, even to di Baffi for very special occasions. George welcomed us like his own family, as he did with all his friends, which Dad was honored to be.

And for the sake of history, it was George who along with Jack Murphy (and Dad and a tuxedoed Regis Philbin as MC) who led the charge for the 1963 classic “Big Eat,” (the Ernie Ladd vs. Nick Cordileone eating contest, won by Ernie by a scant chicken wing), so deliciously reawakened by the gifted Union-Tribune columnist Logan Jenkins a few months ago and which, by rights, should’ve been held at di Baffi.

No doubt, a giant thin-crust slice of our own history has passed.