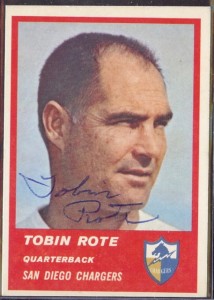 I really enjoy looking over past football preview articles and magazine issues, and seeing how players, teams and seasons shook out in comparison to the experts’ prognostications.  I like to figure out what was not taken into account, see how unexpected injuries factored in, and what the upsets were.  In this vein, I took a look at a 1963 AFL Preview in the SI Vault.  You can find the entire article HERE.

SI clearly expects the Kansas City Chiefs (formerly Dallas Texans) to return to the AFL title game and take home their second-consecutive championship.  Unfortunately, that didn’t happen.  Nor did the Bills represent the Eastern Division in the championship game, though they came pretty darned close.  The Bills lost a divisional playoff to the Boston Patriots, a team that the author found wholly uninspiring, and predicted to finish third place in the division.

In the West, the author praises the Chiefs and Broncos (who were apparently ready to win, save for a couple of guards), and gives very little consideration to the Chargers and Raiders.  Both teams came off poor seasons in 1962, but as history shows, were contenders for the Western Division title until the very end, when the Chargers defeated the Broncos by a score of 58-20 on December 22nd, to claim the title.

In all, fun stuff, and interesting ideas on the possibilities for each of the AFL squads in ’63.  But as they say, there is a reason the still play the games.  The experts are often, far from expert.