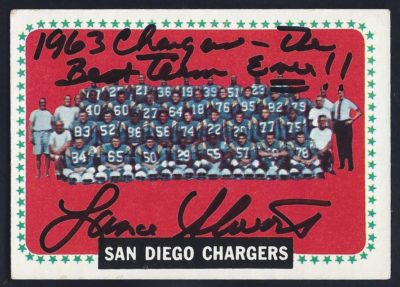 This football season was an odd one for me.  For the first time in my life, we didn’t have professional football in San Diego.  There was a lot of hatred towards the Chargers around here, and the media didn’t quite seem to know how to handle things.  Report the scores? Don’t report the scores? Love the Chargers, or bash them? It was all rather uncomfortable.

As for me, I stayed rather far away from it all.  I didn’t watch the Chargers at all, and I don’t see that changing anytime soon. However, I was just as active with my old standby that is collecting signed AFL trading cards. In fact, many of the people reading this post answered my request for signatures this year, and some did it multiple times (right, Gino Cappelletti?)

While I worked on a number of fun collecting projects, the one that I think I enjoyed the most was the 1964 Topps team cards.  I find these cards to be excellent for signatures, as they allow for a great deal of flexibility.  I’ve got players, coaches, owners, trainers, administrators, media, team photographers, a ball boy, a gate crasher, authors and many more.  I try to keep a rough guideline that a person has to have been associated with the team in either 1963 (the year of the team photo shown) or 1964 (the year the cards were released) to be included in the collection, but I have admittedly strayed from this rule a few times.

Like the rest of my signed cards, I have posted my collection of team cards in the MEMORABILIA section of this website.  You can find the specific page at 1964 Topps Team Cards. 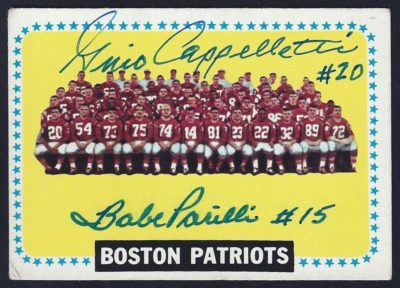