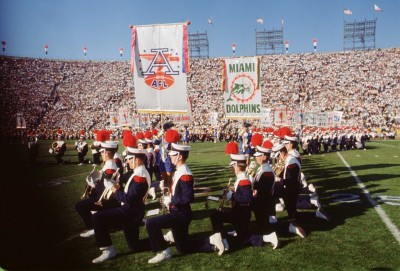 January 15, 1967.  The day of the first AFL-NFL Championship game, later to be referred to as Super Bowl I.  An historic day for sure, although the Packers victory might still stick in the craw of AFL fans.  Original images from that game are relatively easy to come by now, especially with the dismantling of newspaper photo archives across the country.  Still, they are a treat to own, and a bit of history that a fan can hold in his hands.  I’ve been fortunate to acquire four shots taken by a fan, from his family’s seats that day, as well as a handful or original slides and prints.  They, and images of many other AFL topics, are always available for viewing in the Photo Galleries on this site.